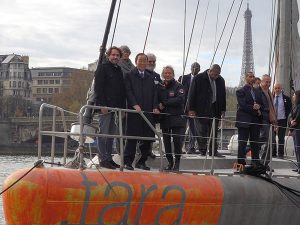 UN Secretary-General Ban ki-moon, at the bow (centre front), on board the TARA in Paris

In the context of the COP21, Tara welcomed the Secretary General of the United Nations, Mr Ban Ki-moon

At mid-term of the climate negotiations, UN Secretary Ban Ki-moon visited today the research schooner Tara, docked in Paris during the COP21. Two years after his first visit aboard Tara in New York, he inquired about research advances on the planktonic world achieved as a result of the Tara Oceans expedition (2009 to 2013).

7 months after the publication of the first articles in the prestigious journal Science, Eric Karsenti, scientific director of the Tara Oceans (CNRS-EMBL) expedition, reminded us what motivated this research and its main results. “This detailed mapping of plankton biodiversity now offers important data that will be used to better understand the potential response of marine plankton to climate change over the next 10 years” explained Eric. “The interest of this research is to provide a baseline of the planktonic system composition in order to model its future response to climate change”. Until now, our knowledge of this ecosystem and its composition has remained very limited.

Welcomed by the crew and a group of children, Mr Ban Ki-moon highlighted the importance of oceanography and ocean monitoring to anticipate changes, while protecting the world’s populations. He also expressed his concern regarding ocean acidification and rising sea levels that threaten the small islands of the Pacific Ocean.

The Secretary General of the United Nations then spoke about the importance of symbolic entities such as Tara, ambassador of the ocean at the COP21, to promote understanding of environmental issues among the general public and encourage nations to engage in a dialogue around these questions. He also thanked agnès b. for her commitment to Tara and the important awareness-raising effort conducted with younger generations. “The ocean is sick. The United Nations wants you, our children, to inherit a sustainable and healthy planet”, said Mr Ban Ki-moon, addressing the children who came to meet him.

“It is essential to reach an ambitious and universal agreement in Paris. The ocean, which is the heart of our climate machine, is still relatively absent from the negotiations. It is crucial that concrete measures be developed and gradually incorporated in the Climate Convention”,  added Romain Troublé, Secretary General of Tara Expeditions. In collaboration with the Global Ocean Commission, Romain presented the “Because the Ocean” declaration signed today by 17 nations to integrate the ocean in the future climate regime.

Concluding this first week of negotiations, today’s meeting reflects the importance of including the ocean in the climate discussions. It also gives credit to the advocacy work conducted by the Ocean & Climate Platform, strongly committed to giving the ocean a voice at the COP21 and supporting an ambitious agreement.

Since 2003, the scientific and educational expeditions aboard Tara – from the Arctic Ocean to the South Seas – have increased our understanding about the impact of climate change and the ecological crisis confronting the world’s oceans. This research was conducted in collaboration with renowned international scientific institutions and laboratories. After traveling more than 320, 000 km around the globe, Tara Expeditions will invite the general public, as well as decision makers to take a fresh look at the role of the ocean in the climate system during the COP21.

The “Because the Ocean” Declaration

Initiated by H.S.H. Prince Albert of Monaco and the Ministry of Foreign Affairs of Chile, this Declaration gives more prominence to the ocean in the framework of the UN negotiations on climate change at the COP21 in Paris. Signed by 17 nations, the “Because the Ocean” Declaration is the result of a partnership between the following organizations and governments: the government of Chile, the French government, the Foundation Prince Albert II of Monaco, the Global Ocean Commission, the Institute for Sustainable Development and International Relations (IDDRI) and Tara Expeditions. This statement is proposed in response to the absence of the “Ocean” theme in the climate negotiations at the COP21, despite the crucial importance of the ocean in the climate system regulation. Click here to read the declaration.

Tara in Paris for the COP21

Tara will be in Paris until December 18 to support the achievement of a binding and universal agreement to fight global warming at the COP 21. The schooner will be docked in the heart of Paris, near the Pont Alexandre III and the Grand Palais. Nearby, the Tara “Ocean & Climate” Pavilion will host a series of events dedicated to the ocean. Discover the program.