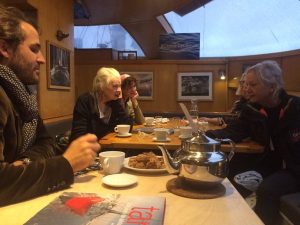 Agnès b and Vivienne Westwood in conversation on board Tara Expeditions. © Marc Domingos

“Taking action for a healthy ocean and a preserved climate”

During the COP21, in collaboration with the members of the Ocean & Climate Platform, Tara Expeditions will support a series of recommendations aimed at including the ocean in the future climate regime.

On the brink of COP 21,  the Ocean Climate Platform discloses its recommendations

While COP 21 is inaugurating a new phase of commitment on climate, the Ocean Climate Platform disclosed the content of its advocacy at the November 12th 2015 press release- in the presence of Ségolène Royal, French Minister of Ecology- in order for ocean and coastal zones related issues to be gradually taken into consideration via specific measures and included in the various axes of negotiation.

Oceans are a major global climate regulator: they cover 71% of the surface of the Globe, they produce over 50% of the oxygen in the air we breathe, they absorb approximately 30% of the CO2 and 93% of the excess heat generated by human activity.

In support of an ambitious universal and legally binding agreement, the Ocean Climate Platform points out that, Oceans remain the forgotten piece in the climate negotiation puzzle.

9 TANGIBLE RECOMMENDATIONS IN FAVOR OF THE OCEAN

This appeal presents 9 tangible recommendations in favour of the ocean – keystone of the adaptation to climate change – because it is now urgent to fix this inconsistency change:

1.     Provide decision-makers with a state of science on suitable concerns and measures regarding oceans and climate change, including via an IPCC Special Report on Oceans.

2.     Consider the importance of healthy and functional ecosystems to face climate change, by catalysing the implementation of a consistent and resilient network of marine protected areas.

6.     Support in priority adaptation measures for the most vulnerable regions, including coastal zones in developing countries, territories and Small Island Developing States.

7.     Strengthen transfer of technology towards the most vulnerable coastal and oceanic states and regions. International cooperation must include marine ecosystems adaptation and protection projects.

#OCEANFORCLIMATE DAYS FROM DECEMBER 2 TO DECEMBER 6 2015

The launch of the Ocean and Climate Platform appeal is also an introduction to a significant mobilization during COP 21 with the “#OceanforClimate Days”, from December 2nd to December 6th 2015, at Le Bourget- at the heart of the climate negotiations- and in the centre of Paris. Debates, side-events, documentary films will take place during the 5 days dedicated to ocean-related climate issues awareness toward decision-makers and the general public.

About the Ocean and Climate Platform

The Ocean and Climate Platform was established as an alliance of non-governmental organizations and research institutes, with support from the UNESCO Intergovernmental Oceanographic Commission on June 10th 2014 during the World Ocean day.

Follow us on social media @Ocean_Climate with our hash tag #OceanforClimate