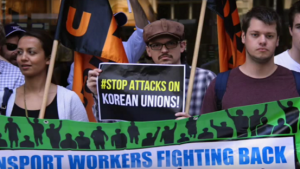 The ITF has urged its affiliates to step up their global solidarity for Korean unions facing an ongoing serious crackdown.

The Korean Confederation of Trade Unions (KCTU), the Korean Public Service and Transport Workers’ Union (KPTU) and other unions are being severely repressed over their opposition to government labour reforms which will restrict their ability to intervene when employers implement workplace changes that are detrimental to workers.

They say the results will include cuts to overtime pay and salaries, making it easier for employers to fire workers, and weakening protections for subcontracted workers.

In a message on 11 December, ITF general secretary Steve Cotton said affiliates needed to act because “the repression has been increasingly severe, involving multiple raids on union offices and investigation, arrest and imprisonment of union officers and members…We also hear there are plans to charge the KCTU leadership with the vaguely defined crime of sedition.”

He asked affiliates to deliver letters to the Korea president, ask their Korean embassies to receive their delegation, and to organise and publicise protests outside Korean embassies on social media using #kptu. He also urged them to sign the LabourStart petition and to prepare for further solidarity.

Cotton added that the ITF was particularly concerned that nine members and officers of the KPTU cargo truckers solidarity division (KPTU-TruckSol) had been imprisoned in relation to a strike calling on food company Pulmuone to guarantee union recognition and safety in its supply chain.

Please email finke_sarah@itf.org.uk to tell the ITF what actions you and your union are planning and to send us reports and photographs.

Watch a solidarity action in Australia and the KPTU videoof the 100 days of the Pulmuone strike.

Read more on Cotton’s letter to the Korean president about the KPTU.