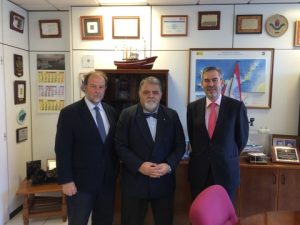 During the visit, the new Director of the Refinery “Tenerife”, Mr. Juan M FERNANDEZ SABUGO, gave an overview of the social and economic importance of the plant for the local society as well as for the whole of the Canary Islands, also analyzing some of the future projects of the refinery in the medium term in the conviction that respond to the changing needs for revitalizing the local maritime and port sector.

Choosing Tenerife as the site for Spain and CEPSA´s first oil refinery in 1930 has had a significant impact on the industry and economic and social development in both Santa Cruz de Tenerife, and the Canary Islands in general. This strategic location has made it possible to supply oil derivatives to various markets (the Canary Islands, Mainland Spain, Africa and the Americas). Throughout their operations, CEPSA has placed particular emphasis on environmental protection, safety and quality, which is backed-up by international accreditations such as ISO Standards and EMAS Audits.