The American Club hosted almost 300 guests at the Piraeus Marine Club on Tuesday, December 8th, requiring exclusive reservation of all three floors of the Marine Club to accommodate all who came to hear the latest news and developments of the Club at the traditional December pre-Christmas gathering. 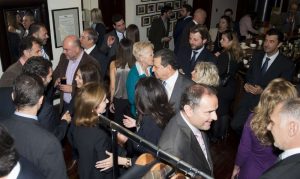 The American Club arranged live video feed to other floors to ensure all in attendance would be able to follow the presentation which included an update with intimate details on the structure and status of its recent investment in the
American Hellenic Hull Insurance Company, Ltd., (Cyprus), in addition to the traditional year in review of the IG Club’s P&I business.

Joe Hughes, Chairman and CEO of SCB, Inc., Managers of the American P&I Club led the audience through the latest vital statistics of the Club as well as Eagle Ocean Marine, the fixed P&I facility of the American Club, managed by Eagle Ocean Agencies, which is part of the management group. Hughes highlighted the Club’s good historical investment performance as well as the strong dollar per ton on reserves as compared with other IG Clubs. Vince Solarino, President and COO of SCB, Inc., took the audience beyond statistics and spoke about the connection of the Club to the Greek shipping market.

Solarino explained that this prompted the Club to embark on and achieve a difficult task of saving the legacy of the Hellenic Hull Mutual through the knowhow of its Managers, Hellenic Hull Management headed by Ilias Tsakiris, while creating a new commercial underwriting company through an investment mechanism which would transfer the good will and ensure continuity of Cypriot/Greek underwriting capacity. Solarino went on to state, “American Hellenic is not a start-up company…it will carry on an established book of business with an established management team. It is a successor company.” Ilias Tsakiris, Managing Director of Hellenic Hull Management then presented the underwriting philosophy of the American Hellenic to the market while explaining in further detail, the synergy between the Hellenic Hull Mutual which will eventually run off, and the new independent American Hellenic which will carry on the local underwriting capacity on a global platform.

The presentation was concluded by Dorothea Ioannou, Managing Director of the Managers’ Piraeus Liaison Office and Global Business Development Director for the Managers. Ioannou spoke about the Club’s business development model
taken from the model’s success in the region of Europe Africa and the Middle East (EMEA) with its greatest constituency in Greece, and gave an update on the status of the Piraeus office, providing the backgrounds on the qualifications,  experience and capabilities of its executives which service the region and pointed out the 100 years of combined experience the team currently takes pride in. Guests were then treated to holiday cocktails and a buffet lunch immediately following the presentations which lasted well into the late afternoon.

The American Club was founded in New York in February 1917 and is the only P&I mutual domiciled in the United States. In addition to its US headquarters in New York, the club is able to provide local service across all time zones, communicating in 11 languages, with subsidiary offices in London, Piraeus, Shanghai, Dalian, and Hong Kong, and a worldwide
network of correspondents.
www.american-club.com

An aerial view of Rio-Antirio bridge