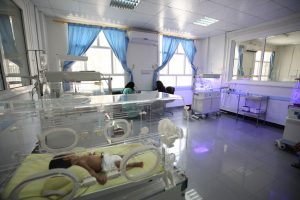 An infant in an incubator at Al-Sabeen Hospital in Sana’a. Intensive fighting and bombing has caused frequent power cuts, shortage of medicines and fuel paralyzing hospitals across Yemen. Photo: UNICEF/Magd Farid

11 January 2016 – United Nations Secretary-General Ban Ki-moon has condemned yesterday’s attack on a hospital supported by Médecins Sans Frontières (MSF) in Sa’ada province, Yemen, which killed at least four people and injured many others.

In a statement issued by his Spokesperson, Mr. Ban expressed his sincere condolences and deepest sympathies to the families of the victims and to the Yemeni people.

This is the latest in a series of attacks on health facilities, following those in 2015 on the MSF-supported Haydan Medical Hospital in Sa’ada and a mobile health clinic in Taiz.

“The Secretary-General is extremely concerned about the increasingly limited access to essential health care services for Yemenis, ” the statement underlined. “He emphasizes that hospitals and medical personnel are explicitly protected under international humanitarian law and that any intentional attack against civilians and civilian infrastructure is considered a serious violation of international humanitarian law.”

The statement further called for this incident to be investigated “through prompt, effective, independent and impartial mechanisms to ensure accountability.”

“The Secretary-General again repeats his call on all parties involved in the Yemeni conflict to immediately cease all hostilities and resolve differences through peaceful negotiations facilitated by his Special Envoy, ” it added.

This attack comes just days after the UN chief voiced his “deep concern” about the intensification of Saudi-led coalition airstrikes and ground fighting and shelling in Yemen, despite repeated calls for a renewed cessation of hostilities.

The United Nations recently reported that civilians are suffering a “terrible toll” in the fighting, with casualties now topping 8, 100, with nearly 2, 800 of them killed.