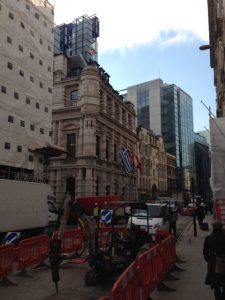 A full house – over 220 people, comprising many of today’s prominent members of Greece’s three-century old strong shipping fraternity and other shipping leaders – attended yesterday at lunchtime this special annual event at Lloyd’s Register headquarters in London’s Fenchurch Street.   John Faraclas was there with his camera:

This annual Vassilopitta event – the cutting of the traditional Greek New Year’s cake, is now more than an established event in the City, paying respect to the Greeks, their tradition and maritime values. Despite the traffic jam in …the region due to road works, most guests managed to arrive on time and participate in the pre-event drinks intense networking until everybody invited arrived.

Like last year, Lloyd’s Register Marine Director Tom Boardley delivered a short speech on the general situation of the industry in difficult times, but also the progress and further development LR had, successfully did the rituals pronouncing also excellently the traditional Greek wishes! Holding the knife, he made the three crosses – then the first four slices: First for Jesus, Second for St Nicholas, Third for Greek shipping in general and the Fourth for Lloyd’s Register! 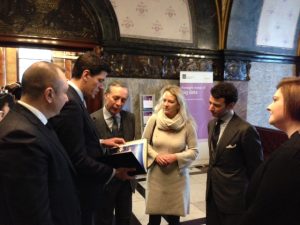 The Italian Ambassador and his wife – in the centre , listening to Mark Stokes of LR –  to the Ambasador’s left explaning the history of the Society in the respective gift book..

Just before the event started, the Italian Ambassador H.E. Pasquale Terracciano and his wife Mrs Karen Terracciano who were also visiting Lloyd’s Register’s impressive Italianate palace designed by Thomas Collcutt, one of the most iconic buildings in the world, had a few drinks with us; what a nice coincidence! 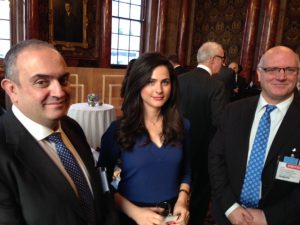 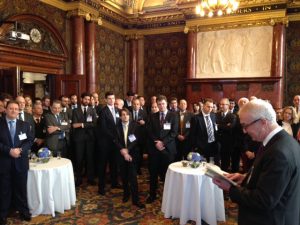 Immdediately following his speech, Tom Boardley invited Theodossis Stamatellos, the  LR EMEA’s head and John Dimitracopoulos from LR’s Piraeus office,  to join him for a salutation, before the children’s chorus from the Hellenic College sang the traditional Greek and English carols – a very touching moment! What a warm and continuous applause that was following the five songs performed by the young pupils aged between six and twelve!! 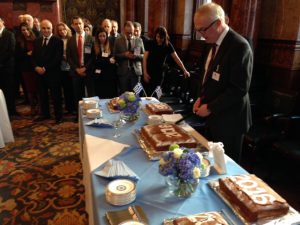 Amongst the guests we spotted Cyprus’ High Commissioner Euripides L. Evriviades, the Assistant Maritime Attaché Commander (HCG) Antonis Doumanis, Stathes Kulukuntis – last year’s sovereign winner from R&K, Dimitris Monioudis of R & K too and president of HESGB, Takis Markatos from Lyras Maritime, Captain Theodore Lembessis with Sotiris Milissis, both from Elka Shipping and the ever present George A. Papadakis and Adrianna Wysocka of A.P & A in London attended too. 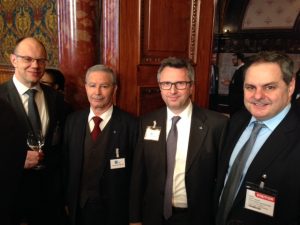 George Foustanos from Andros Maritime and deputy president of the HESGB, Nikos Benetis and Antonis Alexandropoulos from the Royal Bank of Scotland, Chandris’ Alex Xenakis attended too as did John Frangoulis and Maria-Alexia Ermidou from Helix 1966, Dimitris Monochartzis trade analyst from CTS who made his deput, too! 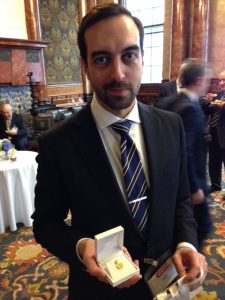 John Vanezos from IACS was as ever there – normally doesn’t misses any such event, Nicholas Skinitis of Hermes Shipbrokers, George A. Skinitis, and many others including over 15 Lloyd’s Register Society members, among them David Barrow, Mark Stokes, Nicholas Brown, Jim Harrison, Dominic Miller, Robert Smart, Angeliki Schiza, Theofilos Kiliokotos and Lakis Andronikou.

The lucky man was Stylianos Papageorgiou, LOMAR’s technical director who won the sovereign, the traditional Constantinato, a Gofas’ creation from Greece! 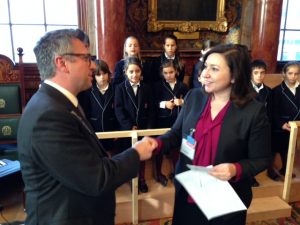 Theodossis Stamatellos LR’s EMEA cordially congratulating the head teacher/musician; at the back the young pupils  chorus

Interesting and valued gifts for the occasion were given to all guests. We look forward to many more Lloyd’s Register events, which amongst others, boost the moral of all involved in the shipping adventure, particularly in times of trouble…!