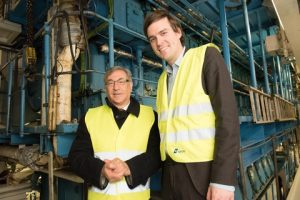 The European Environment Commissioner Karmenu Vella seen here on hte left on board the DFDS vessel “Magnolia Seaways” in the port of Ghent.

European Environment Commissioner Karmenu Vella visited last Friday the DFDS vessel “Magnolia Seaways” in the port of Ghent. The purpose of the ECSA-organised visit was to demonstrate how a scrubber functions onboard a modern day vessel and explain the challenges arising from the operation of such equipment.

Following the visit, Commissioner Vella said: “The Commission supports innovation in emission abatement technology and ‘early-movers’ such as DFDS provide valuable data. The European Commission, DFDS and ECSA are committed to ensuring that alternative compliance technology is truly sustainable. We should be extra vigilant to make sure that in complying with air quality/emissions legislation, such as the Sulphur Directive, we also avoid a transfer of pollution from air to water. To that end, we actively engage with the European Sustainable Shipping Forum (ESSF) and the IMO to facilitate an exchange of data and user-experience.”

ECSA President and CEO of DFDS Niels Smedegaard said: “We are delighted to have had Commissioner Vella on board one of our ships. Commissioner Vella has shown a real interest in one of the shipping industry’s most important environmental aspects, namely that of sulphur emissions. We hope this visit has shed more light on the plethora of regulatory and technical issues resulting from the installation and operation of scrubber technology and we hope that this visit has underlined the importance of timely cooperation between legislators, shipping industry and the manufacturers to the industry.” 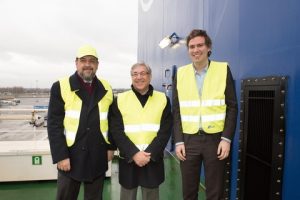 As a transposition of IMO MARPOL Annex VI, the EU Sulphur Directive 2012/33/EC requirements impose since 1 January 2015 that ships sailing in the SECAs (Sulphur Emission Control Areas – the Channel, the North Sea and the Baltic Sea) use bunker fuels with a sulphur content of maximum 0.1% or that the same level of emissions is reached by the use of alternative fuels or compliant abatement technologies.

While scrubbers have been identified as one of the few abatement technologies available allowing ships to reduce the sulphur content in their emissions, the EU Water Framework Directive (WFD) is a source of concern for European shipowners. The WFD sets limits for the content of pollutants in ports, estuaries and coastal areas. This in turn means that the discharges of scrubber washwater will in some areas be well under the limits set by the WFD, while in other areas with poorer water quality, washwater discharges might be prohibited by Member State legislation.

Moreover, the WFD foresees a progressive reduction of some substances and a complete phasing out of others. However, due to a lack of information on the actual composition of washwater discharges, it is currently not possible to ascertain whether scrubber discharges fall within the two aforementioned categories. Hence, more scientific research on the actual ecological effects of scrubber discharge is necessary. Certain Member States have nevertheless already moved to ban the use of open loop scrubbers in their ports, estuaries and coastal areas.

Member States should define a clear and long-term position with regard to scrubber washwater. Any restrictions introduced on the use of open loop scrubbers should not be applied to existing installations. Shipowners that have made irrevocable investments in good faith to be compliant in time with the Sulphur Directive and international rules, but are facing uncertainties, should not be penalized.

The current uncertainty and lack of harmonisation not only jeopardises investments already made by operators, but also hampers the uptake of scrubber technology which might be further encouraged with the introduction of the 0.5% sulphur requirement introduced in 2020 in the territorial seas, exclusive economic zones and pollution control zones of Member States as prescribed by the Sulphur Directive.