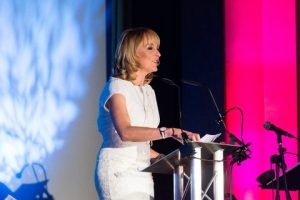 Television presenter Louise Minchin will be welcomed back as the host of the second Mersey Maritime Industry Awards.

British journalist and BBC news reader Louise will present the ceremony that celebrates the best of maritime businesses in the North West and Isle of Man.

The event is organised by Mersey Maritime – the maritime cluster organisation that represents more than 1, 700 businesses in the north-west of England – and follows on from the success of last year’s inaugural Mersey Maritime Industry Awards (MMIAs) in March 2015.

Awards host Louise has been a regular on our television screens for some years. Since 2006 she has been an anchor on BBC1’s early morning Breakfast show, which she currently co-hosts on Mondays, Tuesdays and Wednesdays alongside Bill Turnbull. Between 2009 and 2012 she also co-hosted BBC’s Real Rescues with Nick Knowles and Chris Hollins. The BBC regular has also guest hosted The One Show a number of times.

Louise said: “I’m honoured to have been asked back to host the Mersey Maritime Industry Awards 2016 and am very much looking forward to meeting all these businesses that do so much for the maritime industry. Award ceremonies like these are a wonderful opportunity to recognise formally their hard work and achievements. It’s going to be a spectacular evening and I’m really looking forward to being involved again.”

Chris Shirling-Rooke, CEO of Mersey Maritime, said: “We are really looking forward to welcoming Louise back for a second year. She did a fantastic job last year and we are delighted she has agreed to join us again for this year’s awards.”

Following the announcement of the finalists in nine of the categories last week, the nominees for the final category, Rising Star, have now also been revealed.  They are:

This followed an evening of interviews in which members of the judging panel met with all nominees.

Mr Shirling-Rooke added:  “Our judging panel felt it was important to really get under the skin of the applicants in the Rising Star category and take it one step further than judging them solely on the strength of the written applications. The judges therefore met with them all personally before making their decision. The exercise proved so worthwhile that we have decided to make it an integral part of the judging process in future years.”

There will be a ‘Meet The Finalists’ reception for the judges and the nominees in all award categories on Thursday 11th February, 2016.

The awards will be presented at a special gala dinner on 10th March 2016 at the beautifully refurbished Wallasey Town Hall in Birkenhead, Wirral.

Mersey Maritime is the private-public sector partnership that represents the interests of the shipping, ports and logistics sector on Merseyside, including improvements to the movement of freight across the region. It represents the interests of a cluster of 1, 700 businesses employing 28, 000 people, with a combined turnover of £2.6bn.  The organisation has recently entered into a partnership agreement with Liverpool John Moores University to develop a Global Maritime Knowledge Hub on Merseyside.

New strikes in Greece on 4 February