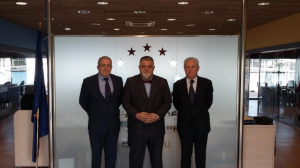 During the meeting, the Maritime Ambassador explained the functions of his office, as a spokesperson and advocate for the maritime and seafaring professions, trying to encourage young people to consider a career at sea or in the maritime sector in order to inspire a new generation of maritime experts and seafarers.

The Escola Europea de Short Sea Shipping is the European reference center for training in logistics and intermodal transport. The aim is the promotion of maritime transport as the basis for the development of sustainable logistics in Europe.

The organization focuses its activities on three areas: Project Office and Innovation, Education and Communication, Knowledge and Research.

The School began operations in 2006 as a training center for professionals and European students of logistics, transportation management and international trade. Years later, it has gained experience and knowledge in managing national and international projects,  communication, contents development in collaboration with recognized European institutions and the promotion of logistics clusters.

The School works thanks to the collaboration of its partners, the Port of Barcelona -which
leads the project-, the Ports of Rome, Genoa port and Grimaldi Group Napoli and Grandi Navi
Veloci lines. Since its foundation, the School works closely with the European Shortsea
Network, and more specifically with the Centers for Promotion of Short Distance Maritime
Transport, promoting short sea and the work of the School in each country of the Union.