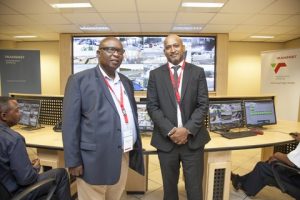 Richard Vallihu, Chief Executive at TNPA, said: “The National Ports Act 12 of 2005 and the International Ship and Port Facility Security (ISPS) Code of 2004 dictate that we as a port authority implement measures to assist in detecting security threats and take preventative measures against security incidents that may affect ships or port facilities used in international trade.”

Phumuzi Sigasa, head of TNPA’s Port Security Portfolio added: “In conformance with regulations and our own Integrated Security Management Systems – Security Strategy Plan, we are rolling out an upgraded security system across our eight South African commercial ports and our head office in Johannesburg. CCTV is but one aspect of our broader integrated technological security system which encompasses technology, skills, systems and procedures.” 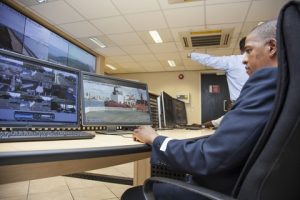 The newly renovated control room at the Port of Durban boasts state-of-the-art video walls for added visibility across the port.

The CCTV system will be integrated between all port sites and the head office to give a bird’s eye view of the port security environment. It comprises 2100 high definition cameras across the various sites – more than double the previous 864 – as well as long range cameras to monitor all port channel entrances and outer anchorages.

The newly renovated control room located at the Port of Durban was the first to go live on 12 February 2016. It boasts state-of-the-art video walls for added visibility across the port. Vehicle security within the port perimeters will also be enhanced through license plate recognition.

The system will also facilitate increased night visibility through thermal imaging that can detect heat emitted by objects or bodies, especially in low visibility areas and through smoke, fog and haze. 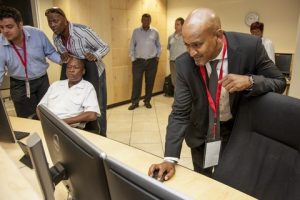 Some of the most common security incidents in South African ports can include stowaways, theft of cargo and damage or theft of assets owned by Transnet and other port users.

The high-tech security system will further entrench the position of South African ports as “smartpeoplePORTS”. Other notable “smart” port systems include the web-based Integrated Port Management System (IPMS) which was rolled out across all eight ports in 2015, enabling key port operations to be managed online and in real time. Transnet is also looking at ways to make the ports more “people centric” and accessible to the public while still maintaining safety and security.