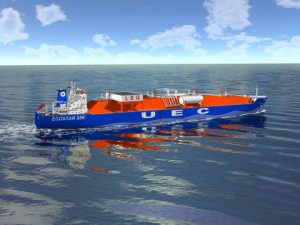 JHW has ordered 5 × 85, 000 m3 Very Large Ethane Carriers (VLECs) for a JACCAR/Hartmann Reederei joint venture, called UEC (United Ethane Carriers); each vessel will be powered by a single MAN B&W 6G60ME-GI main engine. Dalian Shipbuilding Industry Offshore Co. Ltd. (DSIC) will construct the vessels in China, while Hyundai Heavy Industries (HHI) will build the engines in Korea. Delivery of the first carrier is scheduled for the middle of 2017.

Captain Ulrich Adami, Fleet Manager of Hartmann Schiffahrts GmbH & Co. KG, said: “The ME-GI engine appealed to us for several reasons, not least its environmental credentials with negligible slip of gas fuel, and its robust, stable combustion properties – even in heavy seas. We also viewed its high fuel efficiency and its flexibility of being able to run on HFO or ethane as pluses when it came to selecting main engines for our newbuildings.”

The engines will meet Tier III emission requirements with the aid of MAN
Diesel & Turbo’s EGR (Exhaust Gas Recirculation) technique. They will
feature an injection pressure of 400 bar and form the main part of a propulsion
system that also features a MAN Diesel & Turbo Alpha controllable pitch
propeller

The ME-GI engines will drive VBS1810 propellers, which are the largest Mk 5
models (diameter 7.6 m) ordered from MAN Diesel & Turbo’s propeller
portfolio to date. To maximise efficiency, the propeller plant employs propeller
blades of Kappel design, as well as a fairing cone/rudder bulb system. MAN
Diesel & Turbo is also providing each vessel’s shaft-alternator system.
Upon construction, the vessels will be the largest ethane carriers ever
constructed. MAN Diesel & Turbo also reports that it currently has eight
ethane engines on order. The JHW order stems from a letter of intent signed
by Hartmann Schiffahrts Gmbh & Co. KG, Jaccar Holdings, HB Hunte
Engineering and DNV GL at the SMM 2014 trade fair.

The newbuilding ethane carriers form the basis for United Ethane Carriers, a
new ethane venture that the Hartmann Group is developing with Jaccar
Holdings of Luxemburg for which long-term charters have already been
secured.

The vessels will also feature another world-first in the form of their innovative
‘Star-Trilobe’ tanks that consist of three cylinders combined into one. Due to
better utilisation of the space in the cargo holds, this results in higher
efficiency and allows an increase in cargo capacity of nearly 30% over
similarly-sized vessels with conventional tanks, reducing shipping costs
through greater economies of scale.

About the ME-GI engine
The ME-GI engine represents the culmination of many years’ work.
Depending on relative price and availability, as well as environmental
considerations, the ME-GI engine gives shipowners and operators the option
of using either HFO or gas – predominantly natural gas. MAN Diesel & Turbo
has also developed an ME-LGI version of the new technology that is capable
of operating on methanol, and is currently developing an ME-LGI version
capable of running on LPG.

The future is bright for new generation of lighting products