Singapore Shipping Association President points to the value of working together 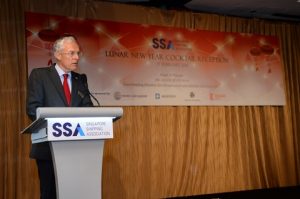 The coming year will be challenging for the shipping industry as global markets face a slowdown, however, the measures put in place by the Singapore Government and Maritime and Port Authority of Singapore (MPA) to help boost the industry are very encouraging, the President of the Singapore Shipping Association (SSA) told its members at its annual Lunar New Year Cocktail event in Singapore.

Emphasising that the SSA was not known to just sit back and wait for goodies to be handed out, Mr Poulsson said: “The SSA is very fortunate to have active members who are very driven in safeguarding Singapore’s maritime interests and its status as an International Maritime Centre.

“On top of their day job, these individuals readily volunteer to share their expertise, often sniffing out potential ideas that spark off initiatives, which they develop till fruition for the greater good of our industry, ” he told the invited guests.

He also outlined what initiatives the SSA has put in place to help shipping in these challenging times and in line with the encouragement by Prime Minister Lee Hsien Loong to urge Singapore to remain focused on the longer-term, provide opportunities to upgrade skills, better productivity, and to give training a bigger push.

In his speech Mr Poulsson recognised the outstanding leadership of Singapore’ former Minister of Transport Mr Lui Tuck Yew, who was awarded Honorary Membership by the Association.

He said: “On behalf of the SSA I would like to recognise the outstanding leadership and great contribution of this man who has always kept the maritime community close to his heart and the Singapore flag flying high.”
He also congratulated the SSA Young Executives Group (YEG) on reaching its 10th anniversary, which was launched on 16th February 2006 after the SSA Council recognised the need to nurture future leaders of the maritime industry.

The President revealed how the SSA, along with other organisations including INTERTANKO and the Asian Shipowners’ Forum, has been hard at work drafting the ‘Regional Guide to Counter Piracy and Armed Robbery Against Ships in Asia’ published by ReCAAP ISC. “The guide is comprehensive, all encompassing, useful and relevant to seafarers on all ship types trading in Asia. It will assist them to avoid piracy attacks, deter and delay attacks, as well as provide recommended measures should an attack occur, ” he said.

Members were updated on the progress of the Singapore War Risk Mutual (SWRM), which the SSA has pioneered. The SWRM has now been running for one year after it was originally set up to provide a local alternative of flexible and alternative war covers. A total of 19 SSA members have supported the project with 313 ships, which has exceeded its target for the first year. This number is expected to grow to 500 over the next six to 12 months.

Mr Poulsson explained to members that the last Council formed a Work Group to focus on ship finance, capital-bond markets and listings in Singapore. This reason for this decision was a perception that, along with insurance, this was an area where Singapore is not as strong as it should be. Work on this is currently ongoing.

He added that the SSA is playing an integral role on various levels of the national SkillsFuture initiative and it has also chaired the Maritime Manpower Resource Panels (MMRP) on ship agencies and technical management.

In preparation for the mandatory use of a mass flow metering (MFM) system for bunkering in Singapore from January 2017, the SSA has redesigned its existing bunkering courses and launched a third, to equip the shipping industry’s bunker cargo officers, surveyors, and all those involved, with the relevant competencies in the new benchmark for bunkering practices.

Members also heard how the SSA has submitted a 13-page document to the Ministry of Finance for consideration during the Singapore Budget 2016 public consultation period.
Mr Poulsson revealed the SSA’S plans to showcase the offshore and marine sector and raise the profile of Maritime Singapore with the ambitious event OSV@Vivo at Singapore Maritime Week in April. The event will include plans to berth two offshore support vessels (OSV) for a rarely available walkabout at its popular waterfront shopping mall Vivo City.

To achieve its objectives, the SSA plays an active role in promoting the interests of shipping in Singapore and internationally, and co-operates with other regional and international shipping organisations to protect the marine environment and promote freedom and safety at sea. Currently SSA represents some 470 member companies; comprising shipowners and operators, ship managers, ship agents and other ancillary companies such as shipbrokers, classification societies, marine insurers, bunker suppliers, maritime lawyers, and shipping bankers amongst others.