London’s vitality on show at 54 The Gallery Shepherd Market… 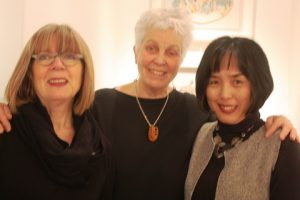 That triple repetition tribute to the city is chosen by Sarah Choi as the title for her new large acrylic painting which stylistically echoes the sculptural ceramics she makes of landmark scenes of the metropolis. 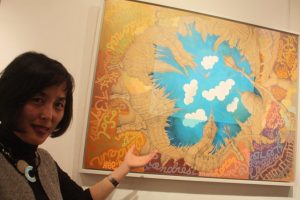 Sarah put together a magnificent 12-piece acrylic work with the word London transcribed into 40 languages. She says that London London London has to be viewed as a whole, for “if you took out one piece the work would fall apart – just as London would if you removed one of its vital components.”

With Hanna ten Doornkaat and Buffy Kimm she is one of a trio of artists based at Hawks Road Artists Studios, Kingston-upon-Thames, who temporarily decamped to Mayfair’s 54 The Gallery for a special exhibition from February 22 to 28 2016. They called the show Abstractions and Figurations. 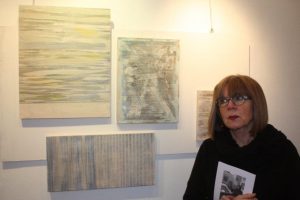 Hanna ten Doornkaat with one of her exhibits.

Diversity is a blessing constantly celebrated by Sarah. Some 300 tongues are heard in London, where more than 1.7m residents speak a first language other than English. The rich mix of ethnicities is a source for the illustrations she paints on her hand-built stoneware. She treats the vessels as though they were canvases, decorating them with sgraffito technique, under-glazes, pencils, oxides, and slips.

She says: “In my hand-coiled work, especially in its joyous detail, I am celebrating London – one of the most splendid cities in the world, possessing its own beauty and diversity. London is one of the most ethnically diverse cities on Earth. To me, the city is ever pulsing and vibrant. I take my direction from my fondness for the capital’s unique architectural scenes, and overlay what I do with sensitivity to the humanity of the teeming millions.” 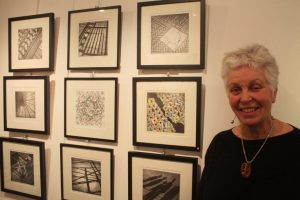 Buffy Kimm with a selection of her etchings.

With such stimulus, “I never stop exploring new adventures in ceramics.”

German-born Hanna ten Doornkaat uses tightly lined grids in her drawings to make tone poems of geometry and memory. One critic was moved by her work to recall writings from classical Greek philosophy examining the reality of lines and circles. Although no-one has ever seen a perfect circle or perfectly straight line, people do know by reason what these are, argued the philosopher Plato. 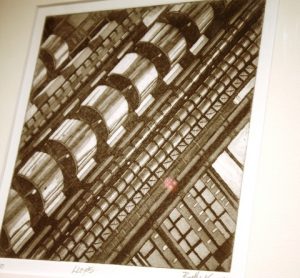 This allusion is relevant because in her exploration of the process and meaning of drawing, Hanna has given the title PI (= Perfect Imperfections) to some of the intricate rectilinear studies. Hers is a laborious endeavour. She uses 6H grade pencil – which has one of the hardest types of graphite and is the hardest to obtain these days! Her compositions on plywood embody fainter acrylic apparitions, signifying the distant presence of things remembered.

Hanna surprised her friends by saying she has just returned from a spell “in jail.” This was not for any offence, but as a participant in what was known as the Prison Drawing Project. That was an open submissions event for professional and student artists who were invited to offer their potential responses – through the medium of drawing – to the atmospheric interior of the former Dean Road Prison, Scarborough. 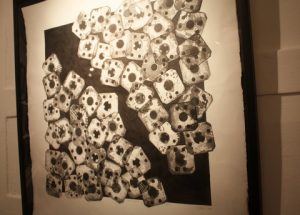 The Old Borough of Scarborough Jail was built in 1866 and decommissioned in the 1960s, since when it has been used as a set for film and television drama and for events and entertainment.

Hanna was one of 10 artists selected to participate alongside six already chosen to exhibit, after tabling her proposal on how she would embellish one of the cells (2.5m high, 2.1m wide and 3.8m long) in the prison. In ‘her’ cell, she decided to inscribe the words “Me, me, me [etc]” on the blank wall as a reflection of a prisoner mindset. At the end of the exhibition, she deliberately rubbed out the inscriptions– in what she saw as a reminder of Buddhist sacred art: the mandalas etched by monks in the sand with highly ornamental patterns and which are then swept flat as a reminder of the transitory nature of life. The prison project, part of the Coastival creative arts festival at the seaside resort, was a popular attraction, welcoming 1, 400-plus visitors. 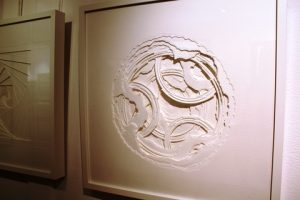 What Lies Beneath. Paper sculpture. By Buffy Kimm.

The central section of the Shepherd Market gallery was filled with the creations of Buffy Kim, who has had a career in teaching (including Production Design for Film and TV for the Masters course  and Course Director for BA Design Studies at Kingston University), and stage and television set design. She shares with her colleagues a fascination with architectural structure, added to which in Buffy’s case are shadows and the relationship to light.

Buffy had 14 etchings on show. “With etchings I like to do something different from everybody else, ” she said. “Most people do figurative etching, but I base mine on architectural pictures or shadows.” Thus her latest subjects have included the Lloyd’s building, which she admires for its physical complexity; shadows cast on the Royal Academy pavement by a Summer Exhibition courtyard installation; scaffolding poles; and motifs touched off by walking on the South Bank and in Perugia, Italy. 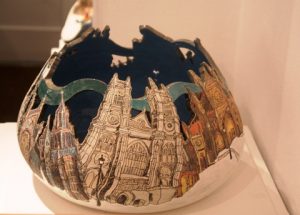 She based one study on the shadows cast by a family standing on the viewing platform – the highest in London – of the 95-storey Shard. Her shadow-inspired work derives from the photos she took just before the light that formed them disappeared. She says that she “looks for the obscure and the unusual angle, rather than a straightforward image.” From the architectural detail she abstracts shapes, texture and scale to create something completely new.

To anyone who thinks that the results are “just prints, ” Buffy explains that the whole etching process is lengthy, needing 12 hours and more than 50 plates in some cases. “People do not realise how much effort goes into it. Each print is hand-pressed and slightly different.”

In tune with the unspoken theme of the show of versatility, Buffy presented eight of her intricate hand-cut paper sculptures, marvels of her dedication and a tribute she says to “the abstract quality that my mentor, Ralph Koltai, associate at the Royal Shakespeare Company, brought to his designs for the theatre.”

For her subtle paper assemblages, Buffy uses specialist Bockingford and Fabriano neutral paper, with unseen small pieces of balsawood holding the layers apart. Paper sculptures such as What Lies Beneath “started as something completely different. The design evolves.” She cut the circle for that study with a medical scalpel, followed by hands-on operation: “You have to tear it in the right direction to get the thickness you want. The tear gives edge and is really important.” 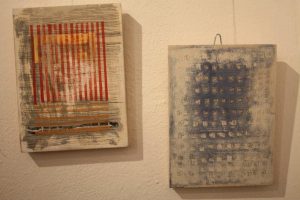 The experimentation demanded by model and prop making, designing and sketching that have played a big part throughout her career have proven a valuable foundation for her more recent artwork.

Among Korean-born Sarah Choi’s keynote ceramics is the elaborate Peace Train, made in honour of the train of that name which in 2013 travelled 11, 000 km from Berlin through Moscow, Irkutsk, Beijing, Pyongyang and Seoul to the port city of Busan. She said: “Through my ceramic tribute to the symbolic train journey, I express my sympathy for reunification of the two Korean republics, as I am a Korean who is longing to see the reconciliation and the unification of the peninsula.”

Abstractions and Figurations is at 54 The Gallery, 54 Shepherd Market, London Wl, untilFebruary 28 2016.www.54thegallery.co.uk

At least the BDI is “positive” and “gaining” momentum…

A discussion with the Maritime Authority of Tenerife