Eknath Giram brings superb collection of his artwork to The Bhavan 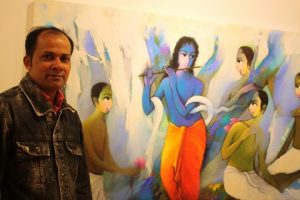 Devotion, dedication and determination – these are the qualities that define Indian artist Eknath Giram.

His beautiful paintings in original, appealing and contemporary style are an expression of his devotion to Lord Krishna, the Supreme Being in Hinduism. His dedication is to the single theme of depicting the youthful Krishna who attracts the gopis (country girls) to become his faithful followers, a story which could be mistakenly interpreted as one of romantic love but which is utterly devotional in the religious sense. Eknath’s determination is shown by his life path from modest beginnings in the countryside to established international artist.

He has just had his first solo show in London, at The Bhavan, the West Kensington facility described as the largest centre for Indian culture and performing arts outside the great nation itself.

The subject matter of the 10 paintings on show is wholly lyrical – in its visual presentation, and because the notes that must be drifting from Krishna’s enchanted flute permeate the calm and playful atmosphere. Warm, fragrant breezes are imagined wafting through the scene, for flutes emit a sound like a comforting zephyr.

For devotees, Krishna symbolises beauty, music and joy and those are the overwhelming impressions that float from Eknath’s acrylic studies, enriched by the warm clear colours that cascade from his palette.

Depicting figures in slightly elongated fashions, he portrays Krishna as a lithe young man, and the young girls are seen as combining the specific and the generality of the beauty of womanhood.  Attentive sheep add their adoration. Notwithstanding the religious motif, and unlike the many thousands of traditional representations of these episodes, none of the characters is dressed in a way that would look out of place in much of today’s India – or in a London suburb – but the composition and intense hues imbue them with mystic purpose.

The radiance he deploys highlighting garments or forest in each picture brings out his depth of allegiance to Krishna as the shining focus of spirituality and bliss.

The narrative is that, overcoming their bashfulness, the gopis in the groves of Vrindavan in North India desert their mundane duties, mesmerised by Krishna as he takes the flute to his lips. It is an emotional moment as they recognise him as the embodiment of beauty incarnate and offer their unconditional love. The wooded surroundings dissolve, in Eknath’s visualisation, into a swirling but bright background. Every tableau is joyous but contemplative, and everything speaks of grace and charm.

It is now 14 years that Eknath has been painting divine themes of this nature. While the work looks to have been carefully conceived in its harmonious mix of colour and composition, he settles in front of the blank canvas without any preconceived blueprint. He says that he “just starts doing things and it does not occur to me to have to plan, design.” The feeling “I want to do this” suddenly comes from inside him.  The brushstrokes just materialise: “If I decided to sit and plan, it would not flow.” 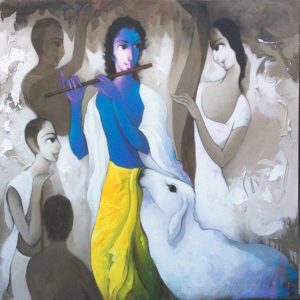 Lord Krishna and the Gopis.

His leaves his works untitled as he believes that labelling them would confine their accessibility to the viewer.

Although this is his first one-man exhibition in London (and is curated by Miguel Angel Collazo of Angel Consultancy of London, Barcelona and Mumbai), Eknath has participated in a group show at the Southbank Centre as the only Indian artist at London Design Festival. In India, he has had solo shows at Mumbai and Chennai.

Eknath owes his successful career in the first instance to the sacrifice of his parents, who identified his talent and supported him in his ambition to become a full-time artist. But for their support, he might well have become a farmer where he grew up, in a quiet area of the state of Maharashtra. Born in Gangakhed, a small place more than 500 km from Mumbai and 390 km from Pune, he gained admission to the fine art college Abhinav Kala Mahavidyalaya in the latter city. There, he graduated in art and received his diploma in art education. He is now based in Mumbai. 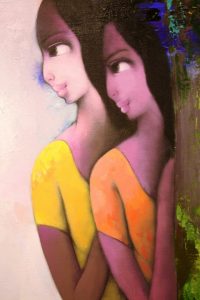 His admirers include Udayraj Gadnis, who has been described as “India’s renowned spiritual artist, ” is “fired by the power of divinity, ” and is a strong promoter of his country’s arts and culture. In London for the occasion, Udayraj Gadnis said: “Eknath’s paintings are a reflection of his soul; his journey, that of a devotee seeped in the colours of deep, divine devotion.  He is blessed with a joyous heart.”