One Size Fits All: Jack Brindley and Inma Femenía at The Ryder gallery… 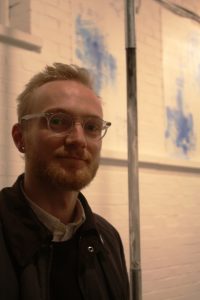 One Size Fits All: Jack Brindley and Inma Femenía at The Ryder gallery in East London present artworks that challenge digital dictates

An exhibition at one of London’s newest galleries thrusts a sharp light onto the hidden ideology of the digital omniverse. It laudably calls for the individual to stand up to the dogma and conceits of the digitalised world.

The Ryder, a venue tucked away in a quiet street in the bustling suburb of Bethnal Green, is presenting until April 2 2016 a ‘dialogue’ between the practices of artists Jack Brindley and Inma Femení, under the title One Size Fits All.

The exhibition looks at the ways in which industrial modes of production are perverted, and turns on its head the human relationship – if there is one – with the algorithms that detect who or what is at the controls of the keyboard or the smart-phone.

To appreciate the unique atmosphere of this exhibition, it is necessary to envisage the internal geography of the gallery in its transformation from a more prosaic purpose. The RYDER is a “project area for contemporary art” that was previously one of the utilitarian garages hard by the thundering rail tracks of the Liverpool Street line that serves Hertfordshire and Cambridgeshire destinations. 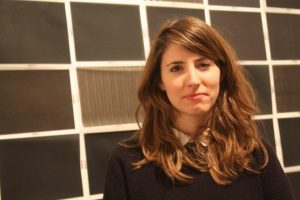 Behind an industrial metal shutter, gallery supporters laboured to convert the property into a high-ceilinged, single storey construction by removing the rafters that divided it into two, and gave the walls an immaculate coat of whitewash. The result is materially and metaphorically “a platform to support emerging and mid-career artists from around the world.” Yes, it is located on unprepossessing Herald Street – but it is just a few paces away from a symbol of 21st century commercial life – Travelodge Bethnal Green – and a short walk from the separate Bethnal Green railway and tube stations – and from the historic Green itself.

In this setting, the gallery says that the two artists in the current exhibition “draw our attention to how standardised approaches structure and define the world around us – by forcing us to experience this concept in its physicality.”

​Jack Brindley’s architectural approach is concerned with the random selections of letters which determine a user’s navigation through digital space. His installation is a challenge to the computer programme that asks users to copy a random set of letters in order to determine that it is a human being and not a rogue machine that is operating the keyboard. Known as Captcha (Completely Automated Public Turing test to tell Computers and Humans Apart) the analytic system is designed to stop automatons from extracting data and creating spam. 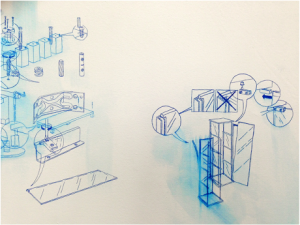 Instructions for Living and Building (2016). Carbon paper on wooden panel. By Jack Brindley.

The artist’s response is a kind of concrete poetry, in which he has installed handrails and tall resin bars strategically in the gallery. These four poles, reaching from concrete floor to wooden ceiling “force the visitor to negotiate their way through the space in a way that is distinctly unnatural, drawing comparisons to the digital shepherding of individuals throughout the internet.”

A set of letters of the kind that might be included in a Captcha box is embedded in the resin and caught in plumes of black and white pigment. This is part of the artist’s probing of the abstraction and uniformity of digital language,

On the walls, meanwhile, are Jack’s drawings entitled Instructions for Living and Building, tackling another form of contemporary language. He has used blue carbon paper to render indecipherable some typical Ikea furniture assembly diagrams. In this way, he “invites us to think about how our lives are shaped by the mass designed artefacts that surround us, and questions the place of the individual within standardised modes of production.” 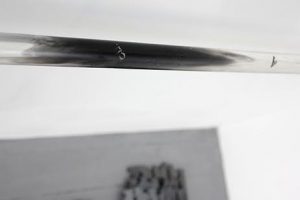 The London-born artist, whose work has been in exhibitions in his home city, in Liverpool, Amsterdam and Vancouver, is getting used to distinctive venues. He is to participate imminently in an exhibition in a disused hotel at Lancaster Gate. The Averard Hotel, a building dating from the mid-19th century, has been grabbed for art displays pending its conversion into luxury flats. It is one of the “transitional properties” being cleverly used by Slate Projects to house temporary exhibitions.

Inma Femenía, an artist based in Valencia, Spain, shows the viewer that, contrary to the title of a 1960s pop hit, black is not black.

Her composition 70 Evidences explores the translation of the electronic to the printed image. The work is a grid of that number of A4 black-printed papers — but the question is posed, are they truly black?

Through what Inma deemed a rigid scientific process of printing the same apparently fixed colour in 70 different printing houses, she brought out the elusive quality of a determined quality of colour. The display on the wall reveals 70 ‘shades of black’. The tones of black defeat the attempted standardisation of language. When the digital is translated to the physical, it is not only grey that has many shades. 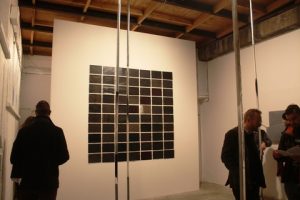 During the private view at The Ryder.

Inma goes on to explore limited perceptions of the digital in her series Graded Metals. This facet of her work is described thus: “Through image-processing software, linear gradients are printed onto metal surfaces to simulate the colour spectrum of the material properties. Following the UV printing process, each panel is further contorted and folded into shapes that seem to claim their status as objects, despite their abstract beginnings.”

Born in Pego in Alicante province, Inma has shown her work in Valencia, Alicante, Munich and Berlin.

She has a BA in fine arts and an MA in arts production from the Universitat Politècnica de València, Spain, where she is studying for a PhD in art: production and research.

Pati Lara, director of The Ryder, said: “The gallery is just one year old, but we are full of positive energy and hard work. I was very pleased with our experience at the recent London Art Fair – both in terms of visitors’ response and sales.”