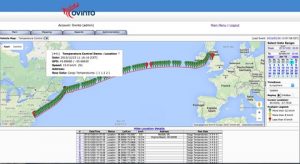 Dublin, Ireland, February 29th 2016 – Globalstar Europe Satellite Services Ltd., a wholly owned subsidiary of Globalstar Inc. (NYSE MKT: GSAT) and the leader in satellite messaging and emergency notification technologies, today announced that its STX3 chipset is underpinning the first Internet of Things system for monitoring craft beer while it is shipped around the world.

US beer distributor,  B. United International, is deploying Ovinto’s satellite-enabled sensor technology to monitor the location, temperature and pressure of hundreds of beer, cider and mead brands as they are shipped in tank containers from breweries around the world. Using Globalstar’s satellite communications, B. United can benefit from real-time details about the status of beer in each container, even when it is in transit across the ocean.

Bringing new levels of transparency to the beer distribution industry, B. United will publish live satellite data about each tank container of beer. By sharing this information with both hospitality industry business customers and consumers, B. United underscores its commitment to freshness and quality in the world of artisanal brews.

Unlike commercial beers, craft beers very often use complex yeast strains and are notoriously difficult to transport because natural re-fermentation can increase the CO2 level and turn the beer to foam. To date, distributors have had to rely on hope for shipping their brews in kegs and for the product to remain in perfect balance and condition. Another shortcut tactic was to bypass natural refermentation altogether through the use of forced carbonation, an industrial process which emphasises efficiency, always at the expense of flavour and aroma. By finding an effective way of shipping beer in temperature controlled tank containers, B. United can cut costs as well as ensure highest flavour and aroma quality.

After learning about Ovinto and Globalstar from its logistics partner, Germany-based Hoyer B. United started a trial in October 2015. It fitted Ovinto’s satellite enabled sensors in a 14, 000-litre tank full of beer to carefully monitor the temperature, pressure and location.

The trial was a success, resulting in zero waste and giving B. United a better understanding of the shipment’s journey to optimise its supply chain. Ovinto Sat is now being installed in all of B. United’s tank containers, each with four temperature-controlled compartments. The deployment will be completed by spring 2016.

This IoT deployment ensures that B. United minimises the beer’s exposure to pressure and temperature fluctuations, resulting in complex brews all naturally refermenting and tasting exactly the same on arrival in the US as when they left the brewery in their country of origin. “After a journey of ten days from Europe or four weeks from Japan, the taste of craft beers can change. On arrival in the US, we review the data from Ovinto and analyse samples in our lab to determine the best way for putting it in kegs, ” said Matthias Neidhart, Founder, B. United.

“The reliability and affordability of Globalstar’s satellite technology makes it possible for us to access and publish data from the transporting ships even when they are in the middle of the ocean. Thanks to this first Internet of Beer technology, our customers and partner breweries can see with their own eyes that the assumed trade-off between quality, freshness, cost, waste and distance can be eliminated. This new paradigm allows us to give all our customers brews of highest flavour and aroma complexity with absolutely no compromise.”

Kris Herteleer, owner of Belgium-based De Dolle Brouwers, supplies beer to the US market through B. United. “By bringing technology innovation into the craft beer sector, B.United is introducing unprecedented levels of transparency on the condition of our beer as it travels to the US. This innovation demonstrates our shared commitment to delivering the best possible product to American beer drinkers.”

About B. United International

B. United International Inc. was established in Connecticut, US, over 20 years ago to import beers of highest flavor and aroma complexity from around the world and distribute them to bars, pubs and restaurants across the US. Inspired by the historic work of the late English beerexpert,  Michael Jackson, who for the first time ever ranked beers by their level of flavor and aroma complexity, B. United now represents world class breweries that are all committed to producing artisanal brews of highest quality. Approximately 75% of B. United’s beers are imported from Europe, all with exclusive agreements. www.bunitedint.com

Ovinto Sat, developed by Ovinto, based in Belgium, provides the distribution industry with details about cargo being transported and its condition, including pressure and temperature, whether it is in the correct location, or has been impacted due to a crash. Satellite is the preferred option for such communications due to its availability, reliability and low power consumption compared to GSM.

At the heart of Ovinto Sat is Globalstar’s low power, tiny STX3 chipset. Because it is battery powered, Ovinto Sat allows customers to monitor materials in unpowered environments including rail tank cars and containers. The STX3’s low power consumption means the battery lasts up to eight years. Ovinto Sat collates data from various sensors and GPS in each of B. United’s containers and sends it securely by satellite to the customer headquarters.  www.ovinto.com