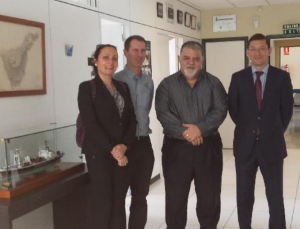 During the meeting, the Maritime Ambassador explained the functions of his office, as a defender of seafarers, trying to encourage young people to consider a career at sea or in the maritime sector with the aim to inspire a new generation of experts maritime and seafarers.

Bergé Marítima (a division of Bergé Operaciones Portuarias) is a business unit belonging to Bergé Infraestructuras y Servicios Logísticos (BISL) and encompasses other business units such as Vehicle Logistics, General Logistics and Shipping.

Bergé y Cía, founded in Bilbao in 1870 as a ship agent and stevedoring company, later extended its activities to cover the whole country, opening offices in all of the major Spanish ports between 1940 and 1960. In the 1980s it began to diversify its business with the importation of industrial equipment and the formation of car distribution companies.

From then on it has been expanding its business into other areas such as finance, energy, logistics and new technologies, which provide an important challenge for the future.