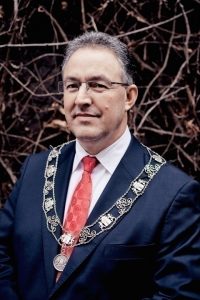 Rotterdam Mayor Ahmed Aboutaleb will take the 550th anniversary of the Rotterdam philosopher Erasmus’s birth as an occasion to visit Basel. During the Mayor’s visit Rotterdam will renew its existing Memorandum of Understanding (MOU) with the Swiss city. The municipal representatives will be joined by a large delegation from the Rotterdam port.

Erasmus lived in Rotterdam and Basel and died in the latter city in 1536. Since both cities are situated on the Rhine, Rotterdam itself also has close logistics and commercial ties with Basel. This important connection has led to the decision by Mayor Aboutaleb and his Swiss partners in dialogue to once again scrutinise the existing MOU. The inter-city dialogue will also deal with substantive matters like rail corridors and the second Gotthard Tunnel tube.

Aboutaleb will travel to Basel in the week of 14 June and the renewed version of the MOU will be signed later this year. On 15 June the Rotterdam Mayor will also attend the Port of Rotterdam Seminar & Business Event. In addition to offering opportunities to network with the Rotterdam port and logistics delegation this event will also bring Swiss freight forwarders, shippers and logistics service providers up to date on the latest developments in the Port of Rotterdam, with special attention to the innovative website Rotterdam Port Connector.

The website Rotterdam Port Connector is the online way to bring potential international clients into contact with Rotterdam’s port business community. Rotterdam Port Connector is an initiative of the Rotterdam Port Promotion Council (RPPC), founded in 1933 as the Stichting Havenbelangen Rotterdam-Europoort. The RPPC acts as an intermediary for its 200 members: companies which are active in and for the ports of Rotterdam, Dordrecht and Moerdijk. By bringing these companies into contact with each other and with potential clients, by organising networking events, participation in exhibitions and receptions for foreign delegations in Rotterdam and via the innovative website Rotterdam Port Connector, it helps retain and expand the cargo flows to and from the ports. Together, the RPPC members represent all possible modes of transport, cargo sectors and services.

Top of the Class for Lowestoft College

ICHCA and FEPORT join forces at global and European level