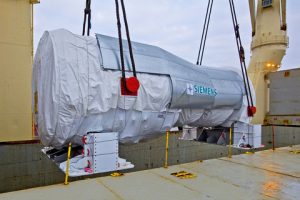 Rickmers-Linie was entrusted with the transport of this 485 -tonne gas turbine made by Siemens for a power plant project in Turkey.

Not only did the operation involve the transport of the largest gas turbine ever manufactured by Siemens, it also marked the first call of this class of Rickmers-Linie ship – a 30, 000dwt multipurpose heavy lift vessel – in Bremerhaven, the place where the Rickmers Group was founded in 1834.

The Siemens gas turbine, which can generate up to 600 MW and has a weight of 485 tonnes, was safely loaded from a barge onto RICKMERS HAMBURG and was followed by a 465-tonne generator and accessories. The parts belong to a gas power plant project, in Hamitabat close to Lüleburgaz in the northwest of Turkey, which is scheduled to be completed by summer 2017.

The load is the first of four shipments and will be discharged in the port of Tekirdag, southwest of Istanbul.  Rickmers-Linie’s specialized vessels will make three more calls at Bremerhaven to load cargo for this project.

Navitrans, agents for Rickmers-Linie in Turkey, secured the project for Rickmers-Linie in negotiations with Bertling Logistics in Istanbul, the nominated freight forwarder, which is coordinating logistics for this project. The office of Bertling Logistics in Hamburg supported their Turkish colleagues with the pre-carriage arrangements in Germany as well as in local coordination and documentation.

“Due to the weight of the cargo and the (for us) historic background of the location, this was not just like any other port call. Of course, no loading operation is ever exactly like another and it is never a routine. As always, thorough preparation, taking into consideration the value, size and weight of the cargo, was key to ensure a smooth and safe operation.”

Bremerhaven is the city where Clasen Rickmers established his shipyard in 1834. Rickmers-Linie, a specialized liner operator for the worldwide carriage of break bulk, heavy lift and project cargoes, continues the Rickmers tradition, being one of the companies of Rickmers Group.

Rickmers-Linie is one of the world’s leading specialists in the global transportation of break bulk, heavy lift and project cargo by sea.

With regular sailings and reliable schedules, the company has set new industry standards. The “Round-the-World Pearl String Service” connects the core business areas of the world. Liner services between the US, Europe and the Middle East/India as well as special charter sailings on demand add value for the globally active customers. In March 2013, Rickmers announced the inauguration of its new Westbound Round-the-World Service.

The company belongs to Rickmers Group, which offers diversified activities in the segments of Maritime Assets, Maritime Services and Rickmers-Linie. Rickmers Group currently manages a fleet of more than 130 vessels.