Freedom Ride: thousands of people will cycle along Liberation Route Europe in the Netherlands on Dutch Liberation Day 2016

A unique cycling event will take place on May 5 2016 (Dutch National Liberation Day) in the Netherlands. Thousands of professional and amateur cyclists and other athletes including speed-skaters will ride along the Dutch section of Liberation Route Europe in the province of Gelderland.

Liberation Route Europe follows the course of troops of the Western Allies in 1944 and 1945. The remembrance trail runs through Britain, France, Belgium, the Netherlands, Germany and Poland. It consists of a network including museums, tourism organisations, governments and the contributions of historians. Together, participants seek to keep alive the memory of the struggles of World War II.

Joining in the Freedom Day festivities will be Team LottoNL-Jumbo, described as “a typically Dutch professional top-level sports team that will be visible 365 days a year and will perform at the highest level.”

The first part of the team’s name relates to the national Lottery (De Lotto). After prizes and expenses, all proceeds from the Lottery are distributed to the National Olympic Committee/National Sports Federation and the Foundation for Utilisation of Lottery Proceeds Netherlands. There are 76 sports associations such as the Royal Dutch Cycling Union affiliated to the NOC/NSF. 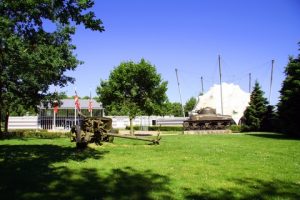 Jumbo is a family-owned supermarket chain with more than 580 stores. Following the acquisitions of Super de Boer in 2009 and C1000 in 2012 Jumbo has become the second largest supermarket group of the Netherlands.

The Freedom Ride will pass several historic places on Liberation Route Europe, in the footsteps of the Allies in 1944 and 1945. Among places featuring on the tour will be the John Frost Bridge (the ‘Bridge too Far’) in Arnhem, the Crossing in Nijmegen, and the Grebbeberg in Rhenen, Utrecht, site of an important WWII cemetery.

The ride will pause at the National Liberation Museum 1944-1945 in Groesbeek for an official ceremony and to allow cyclists to re-fuel. It continues through Wageningen, where the annual Liberty Day parade takes place. In the 5 Mei-Plein, the torch will be passed to official parade representatives.

Team LottoNL-Jumbo has merged the operation of its professional cycling team and professional speed skating team, creating a basis “for a new organisational model in top-level Dutch sports.”

The Freedom Ride is part of The 6 of Lotto, a series of big cycling tours through the Netherlands.

“Our ice skating and cycling team is inviting everyone in the Netherlands, including all fans to ride for freedom with us during the LottoNL-Jumbo Freedom Ride, ” Team LottoNL-Jumbo general manager Richard Plugge said. “Liberation Day has been a festive day for decades where young and old celebrate freedom. The bike is a typical Dutch vehicle that connects people, so there is no better way for us to celebrate freedom than to ride with many others.

“Freedom passes from generation to generation, the same with the love of cycling. That’s why we invite every generation: granddad to grandson, father and daughter, mother and son. We want everyone to ride with us.”

The Freedom Ride will feature optional distances of 80 and 120 km. Participants can sign up individually or along with the professionals. They will start in waves from the Doorwerth Castle, a medieval fastness on the Rhine near Arnhem restored after wartime damage.

A select few will have the opportunity to be part of the first peloton of 500 riders that includes members of BNMO, the interest group for veterans. The group with team LottoNL-Jumbo’s front riders will carry the torch for the Freedom Fire, which will arrive the night before from Wageningen.

The vfonds (Dutch Foundation for Peace, Freedom and Veteran Support) is backing the Freedom Ride. “To ride with freedom is an honour to all who gave everything for our freedom, ” director Ton Heerts said.

Every participant will receive a goody bag with a commemorative cycling jersey. Mr Heerts of the vfonds will fire the starting gun at Doorwerth Castle at 10.30 am on May 5.

To register and for more information go to http://www.teamlottojumbo.nl/freedomride

Find out more about the struggle for freedom on the website and app, with information in five languages:www.liberationroute.com