Last week six outstanding British Marine members and two inspirational individuals were recognised for excellence within the industry, winning the categories they were finalists for at the prestigious British Marine Awards 2016.

Now in its third year, with the largest number of entries to date, the Awards ceremony took place during an exclusive Black Tie Dinner underneath the legendary 19th century sailing ship,  Cutty Sark, which has been moored in Greenwich since 1954.

Presented by British Marine President, Fiona Pankhurst, Awards were given to Marine Advertising Agency and Pendennis Shipyard for ‘Best Marine Company to Work for’ (finalists were Yacht Haven Quay and Landau UK), Noss Marine Academy and MDL Marinas won as ‘Best Training & Development Award’ (finalists were Topsail Insurance and Oceanair Marine), while the National Coastwatch Institution and Tall Ships Youth Trust took home the ‘Charity of the Year’ Awards, which was new for 2016.

Guests at the Awards ceremony also enjoyed a motivational talk from, Talan Skeels-Piggins. The inspirational Paralympic champion was left paralysed from the mid-chest down after a motorcycle accident in 2003, and told he would spend up to two years in hospital upon admission, Talan defied expectations to be discharged only six and a half months later. Undaunted by his injuries, he has since set about a series of challenges to prove to himself and the world that being in a wheelchair would not stop him from what he wanted to do. 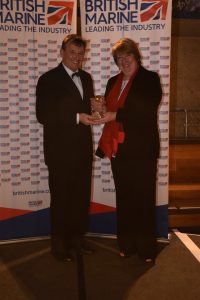 ‘Best Marine Company to Work for’

Marine Advertising Agency won Best Marine Company to Work for in the under 10 employees category. The judges commented that the company offers incredible support to its staff with family and personal needs and there is an overwhelming sense of support and flexibility from the Managing Director, Mike Shepherd, to all staff. There are good training and development opportunities for employees and support for local community projects. One member of staff commented: “When it came to buying a wheelchair, Mike paid for half. I was shocked that my employer would help me in this way.”

Commenting on the win Marine Advertising Agency Managing Director, Mike Shepherd, said: “I’m so pleased on behalf of the whole team to have this recognition from our well respected trade body, British Marine. It was important to me that the business   benefitted employees as well as making a difference to the boating and the local community.”

Best Marine Company to Work for in the over 10 employees category was awarded to Pendennis Shipyard for its excellent staff retention rates. The judges also noted that the company offers staff a very good well-being package; from onsite gym to quit-smoking campaigns through to health checks. Pendennis has a strong sense of community, working with local schools, which in turn helps with staff development. One employee said: “I have worked at Pendennis for 20 years. They support long-term employment through to benefits, progression and change. I hope to work here for many years to come.”

Commenting on picking up the accolade, Mike Carr, Joint Managing Director at Pendennis Shipyard, said: “Employee welfare and building our skilled workforce is crucial to the quality of work that we produce and service that we offer. As a management team we have worked hard over the years to provide a working environment that all of our staff, at all levels, are both proud and excited to be part of. We are therefore delighted to be named as Best Marine Company to Work for in the UK.” 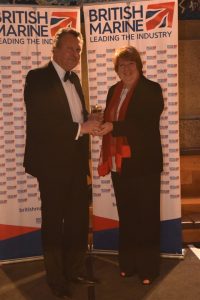 Noss Marine Academy won the Training & Development Award for under 10 employees. The judges took note of its strong Continuing Professional Development (CPD) programme and how staff are encouraged to contribute to external working groups, including associations and sector advisory groups. There is also clear evidence of a culture which fosters continued personal development.

This year’s Training & Development Award for over 10 employees was awarded to MDL Marinas. Innovative bespoke training programmes, including an excellent induction programme called ‘Welcome Aboard’, contributed to the judges deciding to crown MDL Marinas the winner. The business has invested heavily in developing programmes that demonstrate a direct correlation between training and business results. The company has a positive environment that encourages continual learning and keeps staff motivated.

Michelle Hitchcock, Head of Business Development at MDL Marina’s, commented: “We are delighted to have won the British Marine Award for Training & Development, which really is testament to the hard work and dedication of everyone at MDL Marinas. People have always been at the heart of our company and we pride ourselves on the learning and development opportunities we offer our team, and are thrilled for this to be recognised.” 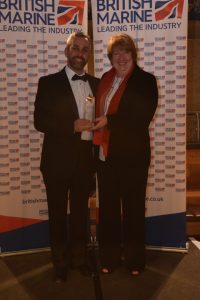 The National Coastwatch Institution took the accolade of Best Marine Charity in the under 10 employees category. The judges made their decision based on how the charity has made a big impact on a low budget, with no paid for employees and whilst it is like many others, it has a huge reliance on volunteers. The charity is at the heart of the industry, protecting the whole country with its commendable safety programme. It was also noted by the judges how all volunteers will be given full training this year in the use of VHF radio.

Richard Hews, Trustee of the National Coastwatch Institution, said about winning the Award: “The National Coastwatch is an entirely voluntary organisation helping to protect and preserve the safety of life at sea and along the coastline. Our 2, 000 trained watchkeepers give their time freely to man some 50 lookout stations around the coast, all at no cost to the public purse. The new British Marine Award of Charity of the Year gives further recognition to the value of the service we provide within the UK Search and Rescue network and the Charity is very pleased to be its first recipient.”

Best Marine Charity in the over 10 employees category was awarded to the Tall Ships Youth Trust which is this year celebrating its 60th anniversary. The Trust supports and works in collaboration with other charities, supports British Marine Boat Shows and has a solid governance and structure. 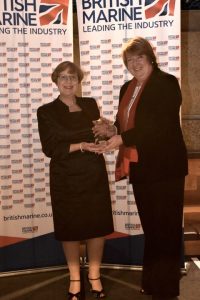 Receiving the Award on behalf of the Tall Ships Youth Trust, Chris Law, Chief Executive, said: “Our crew, staff and volunteers are absolutely delighted to win this prestigious Award particularly as 2016 is our 60th Diamond Jubilee. Each year our work makes a real difference to the lives of thousands of young people across the UK and this Award is a much appreciated recognition of the Trust’s impact and achievements.”

The final award was the Peter Millward Memorial Award, presented annually to people in the industry who have made an outstanding contribution to British Marine Associations.  Chosen by British Marine staff, Ann Davies, Chairman of British Marine Inland Boating along with Tony Howes, Secretary of the Broads Hire Boat Association, were the very deserving winners this year.

British Marine Chief Executive, Howard Pridding, praised all those honoured: “Our congratulations go to all the winners and finalists of this year’s British Marine Awards which also included our new Award – Best Marine Charity. We all want to be the best at what we do and these companies and charities who we have celebrated today can justifiably say that.” 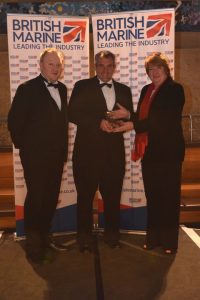 British Marine (the trading name of British Marine Federation Limited) is a membership organisation leading the UK leisure, superyacht and small commercial marine industry. It has over 1, 600 members drawn from both seagoing and inland sectors and represents an industry employing more than 31, 500 people in the UK. For more information about the work of British Marine and how to join, please visit the website: www.britishmarine.co.uk.