Fiji ratifies BWM and other treaties 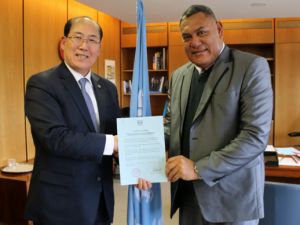 08/03/2016  Fiji has today (8 March) acceded to six IMO treaties, including important conventions covering ballast water management and the control of harmful anti-fouling systems on ships. This brings the number of States party to the Ballast Water Management Convention to 49, with the aggregate remaining at 34.82% of the world’s merchant fleet tonnage (based on global tonnage data as at end-February 2016). H.E. Mr. Jitoko Tikolevu, High Commissioner of Fiji to the United Kingdom, met IMO Secretary-General Kitack Lim to deposit the instruments of accession.

The full list of treaties acceded to by Fiji today is as follows:

– the International Convention for the Control and Management of Ships’ Ballast Water and Sediments, 2004 (BWM 2004);

– the Protocol of 1978 relating to the International Convention for the Prevention of Pollution from Ships, 1973, (MARPOL 73/78); including acceptance of Optional Annexes IV and V to MARPOL 73/78;

– the International Convention on the Control of Harmful Anti-Fouling Systems on Ships, 2001 (AFS 2001); and

– the Convention on the International Mobile Satellite Organization, as amended (IMSO C 1976).