The Assumption of the Virgin, probably about 1475-6, by Francesco Botticini,
C The National Gallery, London.

Visions of Paradise: the surprising parallel between a Renaissance painting and John Lennon’s song Imagine

Half a millennium apart, two visions of paradise unfold. One is openly religious, one distinctly and purposely secular.

The latter is instantly recognisable from the dreamy piano chords that open Imagine, John Lennon’s best-selling solo single. What could this record released in 1971 at the height of Lennon’s creativity have to do with a Florentine painting created nearly five hundred years earlier? 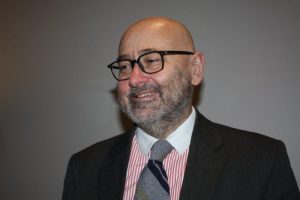 The parallel is perceived by Dr Alessandro Scafi, lecturer in Medieval and Renaissance Cultural History at the Warburg Institute, University of London. He traced during a talk given to the Accademia Italiana Club in London a fascinating unconscious affinity between Lennon and Botticini, as both expressing the same, universal nostalgia for paradise, and a seemingly more logical but complex link between the Renaissance master and Dante’s Divine Comedy.

Botticini’s substantial altarpiece, measuring 228 cm by 377 cm, was bought in 1882 by the National Gallery of London. Normally it is in a hard-to-see place at the top of the stairs when you enter the Sainsbury Wing, but it has been temporarily moved to a more prominent position in the Sunley Gallery as the focus of a special exhibition until March 28 2016.

Matteo Palmieri, in detail of The Assumption of the Virgin, from The
National Gallery.

The painting was commissioned shortly before he died by Matteo Palmieri (1406-1475), to be placed in the burial chapel of the church of San Pier Maggiore. Palmieri was a friend of the ruling Medici clan, a humanist, philosopher, diplomat (notably as Florentine ambassador to King Alfonso of Naples who held him in high esteem), apothecary, and man of many other talents, and importantly in this context a patron of the arts.

At one time misattributed to Sandro Botticelli (1445-1510), of whom Botticini (real name thought to have been Francesco di Giovanni) was an imitator, the masterpiece has fascinated scholars for centuries.

In the work – tempera on wood – we see the glorious dome of heaven open up to the prayers from the earth below of Matteo Palmieri and his wife Niccolosa. Florence is shown there in full Renaissance flower, together with the nearby countryside

Back to John Lennon, singing the refrain: “Imagine there’s no Heaven; it’s easy if you try. No Hell below us, above us only sky. Imagine all the people living for today…”

Playing a recording of the song’s first lines, in his introduction Dr Scafi noted that people do not usually pay full attention to the famous lyric’s words and asked: “Is it, is it really easy? Is it so easy to imagine a world where there are no other worlds? A world with no Heaven and only the sky above?”

Meanwhile, in the gorgeously-coloured canvas, the twelve Apostles marvel at the tomb of the Virgin Mary filled with lilies as she rises into Heaven, kneeling at the feet of Christ, her son, to become the Queen of Heaven. 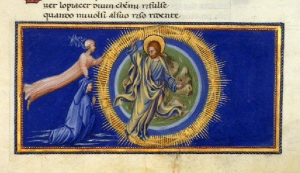 Scattered in these nine ranks of angelic orders we see blessed souls and saints, hermits and martyrs, popes and prophets, for instance Saint Peter, Saint John the Baptist, and the Cumaean Sybil, the ancient prophetess mentioned by Virgil as Aeneas’s guide to the underworld. A sybil was also the guide of Palmieri, in his journey through the afterlife imagined in his three-book philosophical poem, the Città di Vita (City of Life), published in 1465, which came to be regarded as heretical. Palmieri had also been the author of a notable treatise Della Vita Civile (On Civic Life, 1528).

The Città di Vita was modelled on the Divina Commedia (Divine Comedy) by Dante Alighieri (1265–1321). However, while Dante starts his afterlife pilgrimage in Hell, in Palmieri’s poem it is the other way round: the journey starts in Heaven, which Palmieri envisioned to include the entire universe. Inspired by Platonic philosophy, he implied that humans came from a higher spiritual dimension and thither had to return. When the Città di Vita was published after the death of Palmieri, the Church condemned it as heretical, Palmieri’s body was removed from San Pier Maggiore and he was burned in effigy.

Even in his lifetime, Matteo was suspected of heresy, because he speculated that when Lucifer defied God, the angels which did not take sides were sent to the Elysian Fields and then descended to Earth to be given a chance as human beings. Such a thesis about the angels’ descent was akin to a modern New Age concept, said Dr Scafi.

In the altarpiece by Botticini we can appreciate how he painted angels and saints, all radiating light and love in Heaven, as described in the poem composed by his patron. In this sense we could think of this large panel as an interesting example of a Quattrocento picture associated with beliefs held to be heretical, continued Dr Scafi. But we can see reflected in this altarpiece also Dante’s vision of the cosmos.

Dr Scafi referred to another painting,  The Creation of the World and the Expulsion of Adam and Eve from Paradise by Giovanni di Paolo (1445), to point out that the structure of the cosmos here is very much in line with Dante’s vision. Giovanni di Paolo painted this panel just after he illuminated (between 1438 and 1444) the third cantica of Dante’s Divine Comedy,  Paradiso. The manuscript was copied and illustrated for Alfonso V of Aragon, ruler of the Kingdom of Naples, and Matteo Palmieri, who in 1455 was sent from Florence on a diplomatic mission to Naples, very likely saw the Dante codex illuminated by Giovanni di Paolo.

At this point in his lecture, Dr Scafi compiled from material of the epoch a remarkable graphic narrative of Dante’s imaginary epic journey. He had ingeniously assembled a sequence of illustrations from 14th and 15th century manuscripts including that of Giovanni di Paolo, others of known authorship and some anonymous. The result was a concise visual survey of Dante’s whole journey through hell, purgatory and paradise, along the path leading the Florentine poet from the dark woods of sin to the glory of God. As he reaches the ninth heaven and the boundary between the creation and the creator, there is an intense religious build-up, almost too much even for Dante. By the time he gets to the last lines, Paradiso  XXX.142-145, the power of imagination fails him. “Dante, the great poet, was lost for words, ” said Dr Scafi.

Dr Rosa Maria Letts, the founder of Accademia Italiana Club and of Artstur which organises escorted tours to Italy, praised Dr Scafi, who among other works authored Maps of Paradise (British Library, London, and University of Chicago Press, 2013), for his insights into the significance of the altarpiece. The event took place at 55 Exhibition Road, Kensington, home of the Polish Hearth Club and Restaurant.