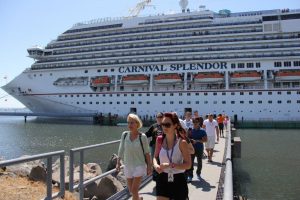 Passengers from Carnival Splendor go on shore in Guatemala

Few countries can boast that they have the best of both worlds – Atlantic and Pacific – in the cruise ship business. Guatemala is one of them.

Hence it is unsurprising that in recent times, some 20 cruise lines have scheduled calls at ports that give access to what is called “the heart of the Mayan world” and to other important cultures, to colonial architecture, and spectacular natural attractions.

The Central American country’s stake in cruise itineraries has grown in the past few years to an impressive size.

In the 2014/2015 season, a total of 43 cruise ships visited Puerto Quetzal on the Pacific coast, while 400 km away by land, the figure for the Caribbean port of Santo Tomás de Castilla was 32. This was up on the tallies of 41 and 29 respectively a year earlier, and foreshadowed further advances in the season to April 2016. 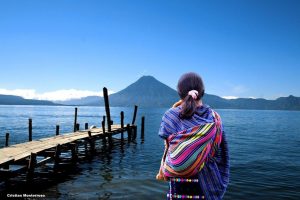 Guatemala is waiting to see whether its new president, Jimmy Morales, will throw his weight behind the cruise sector. Mr Morales, who made his name as an entertainer and is called by some “the Donald Trump of Guatemala, ” detailed few firm policies when he ran for election in 2015, beyond putting forward an anti-corruption platform.

Businesses hope that the new administration will give the go-ahead for the construction of a third big cruise terminal in Izabal, across a small bay from Santo Tomás de Castilla, although activists are worried about the impact on the environment if the implied tourism growth is not managed responsibly.

Meanwhile, tourism is seen as an important source of revenue. Guatemala is marketing its charms by participating in international trade fairs and conferences such as Cruise Shipping Miami, within the Florida Caribbean Cruise Association, and by talking with cruise executives.  At the World Travel Market in London in November 2015, Paola Mejía Saravia, international trade coordinator for the Guatemala Tourist Board, explained the current tourism development strategy. 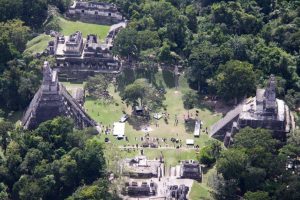 She said that the target markets addressed in London included the already strong North American community, and the home countries of most European visitors: Spain, Italy, UK, Germany, France, and the Netherlands. Emerging markets for travel to the Americas, such as Russia, the Nordic countries, Poland and Croatia were a further focus.

In detail, Guatemala receives most US visitors from the states of California, Florida, Texas, and New York. Canadians largely arrive from Montreal, Quebec, Ottawa and Vancouver. South Americans are chiefly from Colombia, Argentina and Peru. By land, people travel from El Salvador, Honduras, and the southeast of Mexico.

On the ground, terminals at the ports have been upgraded, and the tourist board has upped its training programme for personnel receiving visitors arriving by sea: it is said that as many as 4, 500 cruise passengers disembarking simultaneously can be processed efficiently. 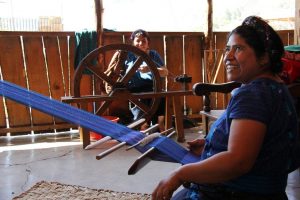 The tourist board is urging lines to choose Guatemalan facilities as home ports, giving their passengers the opportunity to enjoy longer stopovers. Cruise ships from Guatemala usually continue to nearby destinations in Mexico, Honduras and El Salvador, before returning to their original departure points. Such cruises can range from of a week-long trip through the Americas to a 36-night Caribbean package. 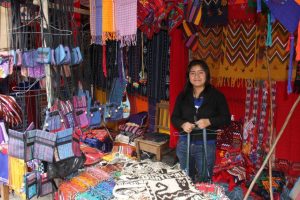 What is there to see for the 1.7m visitors who arrive each year? Incoming travellers head for Guatemala City, Antigua, Atitlán Lake, Chichicastenango market, Tikal natural park and Mayan sites, the rainforests of the department of Petén, the Semuc Champey system of natural turquoise-coloured pools, and the “natural paradise” of lush landscapes in Las Verapaces.

Ships berthing at Santo Tomás de Castilla, where the cruise terminal was completed in 2004, disgorge passengers for a wide array of onshore excursions. The natural paradise of Izabal department has stunning scenery of mountains, lakes, volcanoes and flora and fauna (Guatemala has 33 volcanoes, three of which are active). Lake Izabal is the largest fresh water lake, and is surrounded by waterfalls, canyons, and rivers, the main one being Rio Dulce which flows into Amatique Bay, which is a spa resort. 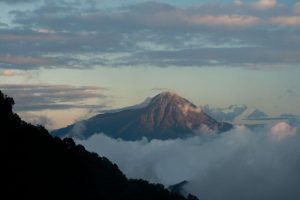 Many tourists sail up Rio Dulce into the lush jungle, and visit Livingston and other coastal settlements to gain an insight into the ways of the local Garifuna population and other indigenous groups.  The Garifuna, who are also present in Honduras, Belize and Nicaragua, have their own language. They are descendants of West African, Central African, Caribbean island, and Arawak people, and have particular customs relating to food and music.

The Caribbean coast is the gateway to Guatemala’s Mayan culture, with huge ancient monuments at Quirigua, Tikal and Copan.

Puerto Barrios is as its name implies a more commercial port city, and administers the department of Izabal. 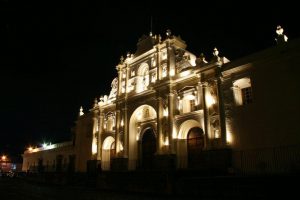 As Guatemala’s largest Pacific port, Puerto Quetzal is important for both cargo traffic and as a stop-off point for cruise liners.

For those arriving on the Pacific coast, the central highlands city of Antigua, with its beautiful colonial architecture and charming cobblestone streets, is a frequent goal. Unesco in its World Heritage citation says of Antigua that “surviving civil, religious, and civic buildings date from the 17th and 18th centuries and constitute magnificent examples of colonial architecture in the Americas.”

The diversity of microclimates and natural clusters of flora and fauna is heaven-sent for tourism promoters. The name Guatemala comes from the Náhuatl language phrase Quauhtlemallan, which means “place with a great many trees.” The country’s physical and climate assets – from mangroves on the Pacific wetlands to cloudy forests in the mountains give rise for example to phenomena such as the enormous number (720) of bird species. Mountains soar up to 4, 220 m above sea level.

One of seven countries in the Central American Isthmus, Guatemala is a multilingual society. It recognises 25 languages: the official tongue is Spanish, and there are 22 Mayan origin languages, one used by the Xinca people and one spoken by the Garifuna.

One of the latest marketing ploys is to pitch Guatemala as a location for romantic holidays, weddings and honeymoons.  Sentimental settings recommended include sites recognised by Unesco, lakeside venues, and locations with a majestic volcano backdrop. “Guatemala has seven regions to choose from as the perfect scenario to begin a love story, ” says the tourist literature.

Will they do it…?