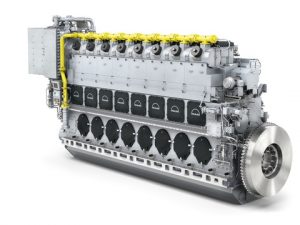 JFE, the Japanese Engine Manufacturer, has entered a new cooperation agreement with MAN Diesel & Turbo for MAN’s 32/44CR, 35/44DF, 48/60CR and 51/60DF modern four-stroke engine types. The agreement applies to marine newbuild projects for ships to be deployed on Japanese domestic trade routes, and where the shipyards and shipowners involved are located in Japan. JFE has produced and supplied medium-speed diesel engines since 1964 under the SEMT Pielstick license, which was acquired by the MAN Group back in 2006.

Upon customer request, the common-rail engines can be provided with
ECOMAP capability, an innovative feature for the MAN 32/44CR and 48/60CR
engines: the flexibility of the CR-system permits the engine to be programmed
to follow different SFOC/power characteristics, with each having an optimal
efficiency at different load points. Hence, the customer is provided with the
potential to realize a better fuel economy through changing the engine’s
operating profiles. Especially aboard vessels with multi-engine installations,
the combination of such CR engines with an intelligent power management
system enables the maximal exploitation of the engines’ flexibility potential.

The dual-fuel engines covering the power range of 3, 180 to 18, 000 kW can be
operated in the Otto (gas mode) or Diesel (diesel mode) cycles from LNG in
the former to more traditional HFO, MDO or MGO in the latter mode.

Significantly, the dual-fuel engines can switch between these fuels at any
engine load between 15% to 100% maximum continuous rating (MCR) without
disruption to the power supply. Extremely environmentally friendly operation is
achieved in gas mode when using LNG as fuel with negligible sulphur (SOx)
and particle emissions, while carbon dioxide (CO2) and nitrogen oxide (NOx)
emissions are respectively reduced by 20 and 85% compared to diesel mode.

Accordingly, running the engines in gas mode complies even with the
stringent IMO Tier III levels without the need for any exhaust-gas after treatment.