‘Seeing Is Believing’: an excellent presentation on d’ROP at OI2016 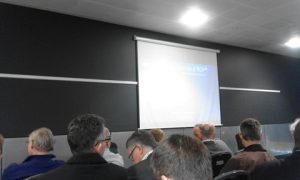 From the presentation – the audience

During 2015, Bibby Athena, d’ROP and the SBI delivered a baseline marine geophysical survey of the 187km East‐West Interconnector (EWIC) cable between Rush Bay in Ireland and Prestatyn in North Wales. With the HVDC cable remaining in service throughout survey operations, traditional pulse induction survey techniques were ineffective and the SBI was selected for its ability to generate real-time 3D sub-seabed imagery of the buried item in situ.

The offshore depth of burial phase of the project totaling 170km was completed in 208 hours, with the d’ROP maintaining the optimal SBI altitude of 3.5m from the seabed in up to 3 knots of tide and tackling sand waves of up to 4m in height. During pre-acquisition trials, the company demonstrated a vertical depth of burial positioning repeatability of less than 16cm; less than 5% of the slant range offset between the SBI and the top of the EWIC cable. High-resolution multibeam bathymetry was also acquired using Bibby Athena’s full rate dual head Teledyne Reson 7125SV2 system.

Bibby HydroMap Project Manager Simon Baldwin comments on the results, stating: “We have been very impressed with the quality of data acquired using the combination of d’ROP and SBI. Tracking the EWIC cable was the first real test of d’ROP’s capabilities and we were very pleased with its performance on the project.”

Bernie Morrison, CEO of PanGeo, “PanGeo is delighted to be involved with Bibby HydroMap on such a high profile project. Our joint aim was always to provide a high resolution but cost efficient survey solution for clients and we are pleased to see that this is now happening.”

The 2016 trials have focused on the southern North Sea, working with clients from the oil and gas, telecoms and offshore renewables industries. Mobilised to Bibby Athena, the d’ROP has acquired SBI data, side scan sonar and sub bottom profiler data using the Edgetech 2000, TSS 350 and 440 alongside visual inspection data.

Andrew McLeay, Managing Director, Bibby HydroMap explains, “We are delighted with the performance of the d’ROP and the level of detail and accuracy of the data we are able to provide. The exceptional line tracking at slow speed and the ability to maintain fixed depth and fixed heading allows us to generate exceptional 3D images using the SBI, giving customers 100% confidence in the data.

“When combined with the acquisition of high resolution multi beam echo sounder and side scan sonar data and video, we’re confident that we’re providing the most comprehensive and accurate survey data within this class of ROV and in terms of value for money.“