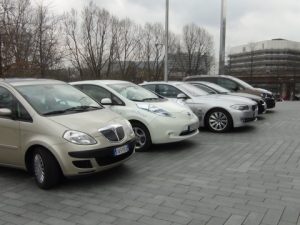 Stuttgart, 16 March 2016 – After over 4 years of activities, the European project ecoDriver released its first results during the final event in Stuttgart today. The project trials have involved 170 drivers in 7 countries (France, Germany, Italy, Netherlands, Spain, Sweden and UK) both in controlled and naturalistic environments testing 9 different eco-driving support systems.

Despite minor variations in terms of percentage, overall the findings showed that, across all the systems, reductions in fuel consumption and CO2 have an average of 4.2% with the highest saving (5.8%) on rural roads. Embedded systems (the more elaborate systems, closely linked to the vehicle) were more effective than nomadic systems with fuel savings up to 6% (against an average 2.5% for the App). This difference is due to the fact that embedded systems perform better because of their integration into the vehicle whereas nomadic systems such as the App, despite being cheaper, relay mainly on GPS information.

“The results from our trials with a large range of eco-driving support systems indicate that there are substantial fuel and energy savings to be obtained when drivers are given precisely tailored advice on green speed and gear, as well as given foresight of how to drive when approaching a particular road or traffic situation. These systems can make a real contribution to reducing the carbon impact of road transport as well as to saving fuel costs. The systems also deliver important safety benefits by encouraging drivers to reduce their speed” – stated Professor Oliver Carsten from the University of Leeds and coordinator of ecoDriver.

Also, the ecoDriver systems proved to have strong positive impacts on speed, time headway, and accelerations and decelerations. This should translate into less severe crashes. Specifically, when the ecoDriver system included an indication of the recommended green speed, the average speed was reduced by 2 to 4%. A significant reduction in speed was also observed before sharp curves on rural roads when using the embedded systems.

“Road transport contributes about one-fifth of total CO2 emissions in the EU. Advances have been made in terms of cleaner vehicles, traffic management, efficiency and intermodality, but the final link is the driver. Driving behaviour has a major influence on fuel use and emissions” Hermann Meyer, ERTICO’s CEO said. “Projects such as ecoDriver allow us to test drivers’ behaviour in real life and represent an important contribution to increase safety on European roads while promoting eco-driving”, he continued.

Official full results will be released later this year on the ecoDriver website.

About ecoDriver project
ecoDriver project aimed to support drivers (car, bus and truck) in conserving energy and reducing emissions. The prototypes developed in this project encourage drivers to adopt green driving behaviour: drivers receive eco-driving recommendations and feedback adapted to them and to their vehicle characteristics. A range of driving profiles, powertrains (conventional, hybrid, electric) and vehicles types (passenger cars, vans, trucks, buses) were tested in this project in order to optimise the driver-powertrain-environment feedback loop. The ultimate goal was to deliver the most appropriate eco-driving advice or feedback for any given situation.
ecoDriver Partners are: University of Leeds (coordinator), ERTICO – ITS Europe, BMW, TNO, VTI, CTAG, TomTom Telematics, IKA, IFSTTAR, CRF, Daimler, simotion.
www.ecodriver-project.eu

About ERTICO – ITS Europe
ERTICO – ITS Europe is a public/private partnership of over 100 companies and organisations across 8 different sectors advocating and actively working on the deployment of Intelligent Transport Systems and Services (ITS) through a wide range of activities (events, projects, interest groups). The ERTICO work programme focuses on initiatives to improve road safety, security and network efficiency whilst taking into account measures to reduce environmental impact.
In the area of ITS for energy efficient mobility, ecoDriver complements other recent ERTICO Partnership projects, including:
eCoMove (2010-2013) – Cooperative mobility systems and services for energy efficiency. http://ecomove-project.eu
ECOSTAND (2011-2013) – framework for a common assessment methodology for determining the impacts of Intelligent Transport Systems on energy efficiency and CO2 emissions. www.ecostand-project.eu
Amitran (2011-2014) – CO2 assessment methodology for ICT in transport. www.amitran.eu
Internal ERTICO study (2015) into the potential of ITS for reducing CO2 emisssions of passenger cars: http://erticonetwork.com/its-for-reducing-co2-emission-of-passenger-cars
www.ertico.com

Not a lot for freight forwarders in today’s UK Budget

No signs of crisis at LIQUI MOLY