Another interesting account by John B Dalby (Captain), AFNI Founder & CEO of Marine Risk Management Ltd  and  Globalert Airborne Reconnaissance and Surveillance as well as of  Globalert Africa (Pty) Ltd on the Migrants issue 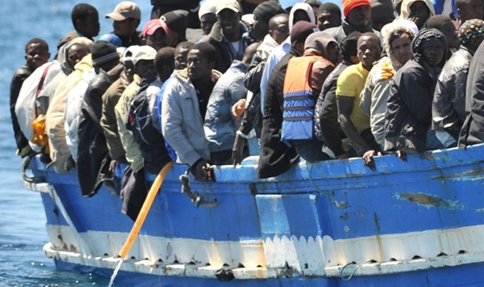 Whilst acknowledging (indeed – applauding) the great work being undertaken by the naval forces in the Mediterranean and their vital contribution to the humanitarian efforts, it’s about time the politicians pulled their socks up and practiced what they preach about civilian/military co-operation.

I shudder to think what the cost of the migrant naval operation throughout the Mediterranean might be, but I’m betting it’s tens of millions of dollars a week. All paid for by EU taxpayers. The hidden danger in this is to our national security posed by removing these naval and military assets from purely military duties in the Eastern Med and elsewhere.

It’s all very well criticising the (presumably well-meaning?) decision-makers, but constructive criticism should come with back-up solutions, and I offer these for your consideration

There are two main challenges facing us. The first is to locate, identify and target (in the benevolent sense!) the migrant craft – usually small, inadequate vessels with poor radar returns. By targeting I mean the co-ordination and direction to surface craft (in my model here I refer to civilian vessels. More on that later) so that they, in turn, can perform the all-important rescue operation using suitable commercial vessels (naval vessels are not best-suited for this type of task).

The second challenge lies in identifying the source of the smuggling operation – not just the point of embarkation of the migrants, but also their origin further inland. If this can be done (and it can), we can nip this evil trade in the bud.

There are some who would say that the answer lies in turning these migrant craft back. I disagree wholeheartedly. What would we be returning these unfortunates to? Neither is “arresting” an option. What would be done with the vessels and the migrants on board – sure as hell the people traffickers won’t be there on board!

Assets so far deployed to help overcome the first challenge have proved inadequate in the overall scheme of things. Helicopters have limited range and endurance. UAVs and drones have strictly limiting performance parameters – weather restrictions, sensor capabilities, line-of-sight operation, range and so on. I could continue, but you get the point.

Instead, why not deploy a civilian-operated ISR-equipped aircraft with significant range, endurance, loiter capability and – more importantly – military-grade, state-of-the-art sensors that can spot a drinks can at 10 miles from a 10, 000’ altitude, a RIB at >50 miles, have instantaneous high definition coverage of around 125, 00 square miles of ocean at any one time, and have the ability to track historically, carry out predictive tracking and behavioural analysis (“Pattern of Life”), and more. All of which, almost incidentally, is produced in an evidential format acceptable in a court of law.

Having located, identified and tracked these small craft, the airborne platform can co-ordinate the surface rescue vessels to the exact position efficiently and, more importantly, swiftly.

Turn now to the surface craft. Why deploy inappropriate warships when a much more suitable (and properly-equipped) merchant vessel (such as a large ferry or small passenger vessel), or several such vessels, could be chartered-in quite cheaply and strategically positioned along the intercept “necklace”, thus ensuring a rapid and efficient response.

I would propose that these rescue vessels could be manned by the many redundant professional merchant seaferers languishing ashore and – most crucially – by trained medical personnel from, say Medecins san Frontieres (MSF) or other similar charities and NGOs (rather than the well-meaning amateurs that have been stepping in – and out! -over the past year or so).

Needless to say, the aircraft is well-suited and kitted out to conduct expert co-ordination tasks (pilots and operators being former Nimrod and AWACS pilots and sensor operators/analysts) and analysis to be the link between surface craft (civilian and naval), other short-range airborne assets and ground personnel including the Rescue Co-ordination Centre in Rome – and others more locally and actively engaged (Italy, Greece to name but two)

I shudder to think what the cost of the naval operation is (all paid for by EU taxpayers, don’t forget!). Certainly millions of dollars per day. It also removes naval assets from their military duties in, for example, the Eastern Mediterranean.

On the other hand, the Globalert alternative defined above could be deployed – in just a few short weeks – for a fraction of that cost. Think less than 1% and you’d still be over the top.

It’s time to stop these champagne-fuelled Summit junkets attended by well-fed, shiny-trousered politicians full of platitudes and pronouncements and devoid of action.

And nothing is helped by the frenzy of ill-informed, sensationalist media comment

Leave it to the ISR specialists and Aid Agencies and keep those self-serving politicians (who created the mess in the first place) out of it.

If you agree with me, please e-mail your support to me at johndalby@marinerisk.com and let’s see if we can get some positive, effective action going to stop the talk, start the action and stop further tragedies and deaths.

Hellenic Hope: Charity at its best yet again