Southampton – launch of an exciting new chapter for WISTA UK 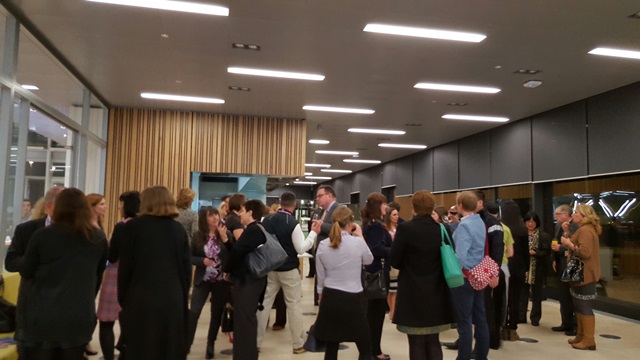 The South East represents more than 20% of the UK maritime industry. Recognising the significance of the South East to the maritime sector and building on the success of its Liverpool chapter, WISTA UK is evolving and has now added Southampton to its list of regional branches.

Chaired by Ewen Macdonald, Director of Seavision and officiated by Sue Terpilowski OBE, President of WISTA UK, the event saw individuals from a variety of different maritime backgrounds gather to celebrate an exciting new chapter for WISTA UK.

The new Southampton chapter will help to broaden the scope of WISTA UK, providing interested women and men from the maritime cluster in the surrounding area easy access to the WISTA network. Members will also benefit from the teaching, support and inspiration of WISTA membership locally, regionally and internationally.

Founded in 1972, WISTA UK is the longest running WISTA globally and aims to establish a wide range of regional pockets in order to expand and interconnect an already growing network.

WISTA provides a global support network for women throughout the shipping and maritime industries to meet, share and discuss work related issues. The association is devoted to providing networking, training and mentoring among its members, as well as educational events, seminars, conferences and informal social meetings.

The evening was opened by Tom Boardley, Marine Director of Lloyd’s Register, followed by a talk from Dr Kate Pike, Senior Research Fellow at Southampton Solent University who will be leading the new WISTA UK branch.

Guest speaker Katy Ware, Permanent Representative of the UK to IMO at the MCA, provided some personal reflections about life as a woman in the maritime sector. She also outlined some of the work that the IMO is doing in promoting gender equality and empowering women in the industry.

“As a woman who has risen through the ranks, I am aware that I have a responsibility to other women in the maritime sector to share my experience with them and support them in their career development. We are very few and we need a network to support each other which is why the IMO global programme for the integration of women in the maritime sector and associations such as WISTA are so terribly important.”

The Southampton team would be delighted to welcome new members to their branch, ranging from senior management to cadet level, both women and men with diverse maritime backgrounds.

WISTA UK was founded in 1974 and is the oldest of the WISTA national associations. WISTA UK currently has over 140 members and is currently on a recruitment drive.

The Women’s International Shipping & Trading Association (WISTA) is an international organisation for women in management positions involved in the maritime transportation business and related trades worldwide. It is a major player in attracting more women to the industry and in supporting women in management positions. With networking, education and mentoring in focus, WISTA seeks to enhance members’ competence and empower career success. WISTA is growing and currently counts over 1.600 individual members in 34 National WISTA Associations.

In 2014 WISTA UK launched the Came by Ship campaign which is designed to raise awareness of the shipping industry and help younger people realise the impact it has on our everyday lives as well as the great potential it holds for career opportunities. The Came by Ship Twitter account now has over 1200 followers and was nominated for the Maritime Foundation’s 2015 Maritime Media Awards – digital media campaign award. The two competitions are now open – essay and photographic full details can be found online www.camebyship.com @camebyship