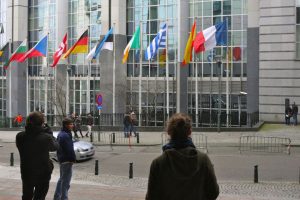 22 March 2016 – The United Nations has strongly condemned today’s terrorist bombings in Brussels, extending condolences to the victims and their families while expressing solidarity with the people and Government of Belgium.

A statement issued by the members of the Security Council indicated that more than 30 people were killed and many more injured in the attacks, for which the Islamic State in Iraq and the Levant (ISIL/Da’esh) has claimed responsibility. The 15-member body stressed the need to intensify regional and international efforts to overcome terrorism and violent extremism, while reaffirming that “terrorism constitutes one of the most serious threats to international peace and security.”

Earlier today, a statement issued by Secretary-General Ban Ki-moon’s spokesperson said “the despicable attacks today struck at the heart of Belgium and the centre of the European Union.”

“The Secretary-General hopes those responsible will be swiftly brought to justice. He is confident that Belgium’s and Europe’s commitment to human rights, democracy and peaceful coexistence will continue to be the true and lasting response to the hatred and violence of which they became a victim today, ” it added.

Also reacting to the terror attack, the President of the UN General Assembly, Mogens Lykketoft, said he is “horrified.”

“We have in the last week seen atrocities in Turkey, Ivory Coast and now in Belgium. It must be condemned in the strongest terms, ” Mr. Lykketoft said in a statement.

“Acts of terrorism are unjustifiable regardless of their motivation and terrorism in all its forms and manifestations constitutes on of the most serious threats to international peace and security. Acts of terrorism have no place in the modern world and only serve to strengthen the resolve of governments the world over to find and prosecute the individuals responsible, ” he added.

“This is not an attack on Belgium, it is an attack on us all and sadly these tragic events remind us again that we are facing a global threat that needs to be addressed globally, ” said UNWTO Secretary-General, Taleb Rifai.

Off-hire and delay under the MYBA Form