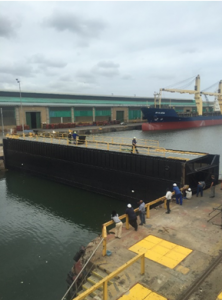 [Durban Bay, South Africa, 24/03/2016]  The 35 metre long 900 ton outer caisson at the Port of Durban’s Prince Edward Graving Dock has now been commissioned after being refurbished at a cost of R30 million.

This was the third and final phase of Transnet National Ports Authority’s (TNPA) comprehensive repair programme on the structure which was deemed unsafe and in need of repair.  Work involved structural repairs to the first of two steel lock gates that separate the dock into two compartments and seal off water from the harbour to enable repairs and maintenance work to be carried out on ships serviced at the facility.

While the outer caisson was handed over to TNPA in December 2015, the commissioning period was longer than planned.

“Although the contractors made up for time lost due to an overrun of private repairs on the AFRICA MERCY ship in August which delayed the start of the caisson repair project, there were further delays towards the end of the project.  We thank all our customers for their patience, ” said Durban Port Manager, Moshe Motlohi.

He explained that the project was on schedule for handover to TNPA until the heavy rains late November and early December prevented the contractors from being able to apply the finishing touch – corrosion protection which is sensitive to weather conditions (wind, rain and humidity).

Once the corrosion protection had been applied the dry dock was flooded to test the caisson and determine how much ballast was needed to keep it in position. The caisson was then docked at the end of the dry dock so concrete could be pumped into the structure, as soon as suppliers reopened after the festive season shutdown.

Meanwhile the survey vessel WG MAGELLAN, which was booked in for repair, entered the dock in January. Leaks on the vessel delayed the planned exit of the WG MAGELLAN, causing a further delay to commissioning of the caisson. The concrete-filled caisson was then floated to position, tested and redocked for minor adjustments before final commissioning.

The outer caisson was put into its operational position on 4 March 2016 and connected to the driving system by 08 March 2016. Thereafter the two tugs and a barge were docked for repair by 10 March 2015.

The outer caisson repair project is the first of 11 large-scale projects at the dry dock which fall under TNPA’s programme to get the facility into peak condition. This is in line with the the South African government’s Operation Phakisa initiative which aims to unlock the economic potential of South Africa’s oceans. Under Transnet’s Market Demand Strategy, TNPA will invest a total of around R2bn spent over the next five years to refurbish existing repair facilities, together with an estimated R13 to 15bn to create new repair facilities at the South African ports.

Part of the plan for the Prince Edward Graving Dock includes assessing the inner caisson with a view to its refurbishment, as well as an ongoing caisson maintenance programme to ensure that TNPA gets maximum return on its investment. This would include a concrete refurbishment programme and replacement of cranes and other equipment.

He thanked a committed Transnet team for spearheading the caisson repair project under Senior Engineer Nandi Mtsokoba, who is leading a team of predominantly female engineers to deliver a world class Durban dry dock facility by the end of 2019, in line with Operation Phakisa.

Mtsokoba is the only female in Transnet nationwide who possesses the coveted Government Certificate of Competency (GCC) and is one of only two engineers in the Port of Durban to have this highest academic qualification in engineering.