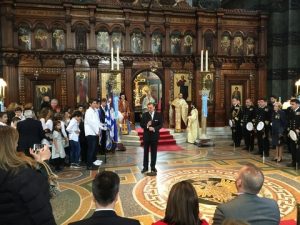 The Greek Ambassador delivering his speech

The 193rd Anniversary from the Revolution of 1821 by Greeks to get rid of the Ottoman yoke was celebrated in Greece and all over the world. Great military, students, public parades and events took place in Greece’s major cities as well as in major centres of Greek Diaspora, amongst them New York, London and Melbourne.

In London, the capital of the United Kngdom which was also celebrating Easter,  after the Sunday mass the special liturgy – ceremony took place at the St. Sophia Cathedral in Bayswater’s Moscow Road. Archbishop of Thyateira and Great Britain Gregorious officiated. A great congregation as always with members of the Hellenic Armed Forces and Security Services present included that of the Hellenic Coast Guard, Members of the diplomatic corps of Greece and Cyprus, Academics, Students and many of the Greek and Greek-Cypriot diaspora living in Greater London attended the event.

After the sort speech by the Archbishop, the Greek Ambassador Konstantinos Bikas delivered a unique speech for the day; he referred to the current Greek crisis, the terrorists despicable recent actions, the migrants issue and the contribution of the United Kingdom and its Philellines – politicians and members of the public which by all means participated and assisted the Greek Revolution of 1821. Amongst others he also mentioned the contribution and participation of Greece’s Shipowners in effectively using with their ships a naval blockade against the logistics of the Ottomans in the Anatolian Coast of Turkey – something similarly needed today in blocking the Turkish traffickers in exploiting the Migrants from war-torn countries such as Syria, Iraq and Afghanistan who poor into Europe creating more than chaos!