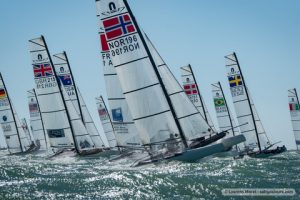 The 47th edition of the Trofeo Princesa Sofía IBEROSTAR for Olympic, Paralympic classes and the Dragon class to be held from 25th March to 2nd April in the bay of Palma, registers a record participation in an Olympic year. In the Nacra17 Class the last two Olympic spots will be decided. For two of the 18 countries who already have their ticket to Rio,  the event in Palma is part of the team selection.

Over 800 boats and one thousand sailors representing 68 nations
“It is the edition with a highest participation in an Olympic year and furthermore, we have a record number of participating nations which had been of 59 up to now”, according to Ferran Muniesa, the spokesperson of the regatta.

Last two Olympic spots
The regatta is a qualifier event for the Rio 2016 Olympic Games. For the first time the last two participating countries in each class will be decided in Palma. In the Nacra17 class 46 countries registered. Their is one spot left for Europe and one for an African country. Ten European countries are on the entry list who have not qualified yet and will fight in Palma for the last Olympic spot: Belgium, Bulgaria, Greece, Hungary, Monaco, Norway, Portugal, Russia and Sweden.

For the Olympic spot for Africa,  a few countries wanted to try their luck but Tunesia is the only nation left on the entry list at the start of the Trofeo Princesa Sofia IBEROSTAR.

Team selections
The countries and teams who have qualified for Rio can be found on our website. Two countries which are already qualified haven’t decided which sailors will represent their nation in Rio. For the Spanish and the German teams the battle and fight to continue their Olympic dream is still on. For the two times Olympic medallist Iker Martinez and his crew Julia Rita Roman it looks like the dream is over. They had to decide not to participate in Palma due Martinez his knee injury.

The Nacra 17 entry list for the Trofeo  Princesa Sofia IBEROSTAR can be found on the event website.