By and large, the 1996 Arbitration Act has done a good job 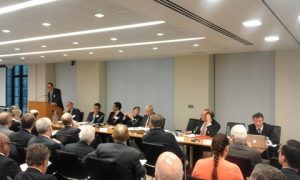 Sesion 1, the panel with Duncan Matthews QC at the podium delivering his speech

A review of the 1996 Arbitration Act over the past 20 years, set in a predominantly maritime context, saw Queen’s Counsel and senior barristers carry out a searching examination of the Act and its sections in London on March 10th.

Twelve advocates, mainly London-based but with considerable experience of arbitral legislation in Singapore, New Delhi and New York, addressed specific areas and issues arising from the working of the Act. They provided opinions as to whether some sections needed to be redrafted to attain comity with other jurisdictions or stay much the same.

The panel considered the following:

*Section 57 as a “slip role:” should tribunals or courts “clarify or remove any ambiguity in the award” (Philippa Hopkins)

*improper/unfair conduct and holding back significant evidence for later use 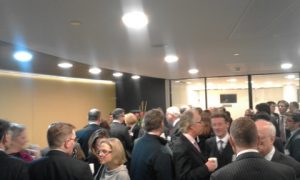 What a networking coffee/tea break that was!

The session was organised by the London Shipping Law Centre and hosted by Stephenson Harwood at their Finsbury Circus headquarters.

The proceedings were chaired by Lord Saville of Newdigate. They were introduced by Dr Aleka Mandaraka Sheppard, Founder and Chairman of the London Shipping Law Centre and a vote of thanks was provided by Jeremy Thomas, an LSLC Director. Taking his cue from professional football, the session’s moderator, Sir Bernard Eder, brandished yellow cards to each speaker after four minutes and red cards as a de facto guillotine on their respective submissions at five minutes.

Summarising the points raised in the first six of the above contributions, Louis Flannery of Stephenson Harwood felt there were no pressing reasons for significant changes to the 1996 Arbitration Act.  He thought section 46 (choice of court or tribunal) did not need amending. “It is very flexible as it is. There were other provisions “that could do with some tinkering, ” including some in section 44 re court powers in respect of arbitral proceedings, while section 60 re costs should not be mandatory. Taken overall, the Act “probably needs another look at some point in time.” 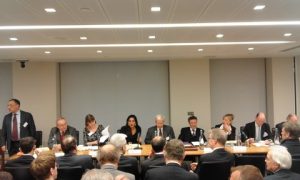 However, Mr. Flannery appreciated the Law Commission’s initiative in assessing the views of legal professionals. Law Commissioner Stephen Lewis told the audience that he would welcome submissions about the Act—what should be preserved and what changed. He was keen that London should remain a major centre for international arbitration in general and maritime arbitration in particular.

Surveying the second six submissions, LMAA arbitrator Bruce Harris felt that overall the Act had been satisfactory. “We should be pleased with ourselves in this country in relation to arbitration.”

There was concern about time limits, particularly in relation to sections 9 (stay of legal proceedings) and 67 (challenging awards in court). He did not think there was any need to change section 69 (limited right of appeal).

Sir Bernard Eder was concerned with criticisms made abroad about the lack of finality of UK awards and the supposed variations between the Act and UNCITRAL Model Law. He felt such criticisms were misplaced and that the 1996 Act had struck the right balance. An impromptu show of hands indicated that his audience largely endorsed his views.

As the chief architect of the 1996 Arbitration Act, Lord Saville said its predecessors, the 1950 to 1979 Acts, had “badly needed reform. Some wanted to abolish it completely. Some thought the right of appeal should be extended.” He recalled working on the Bill to a tight deadline. The Government “were keen to squeeze in some legislation” before the impending General Election.

The question was now ‘does the present Act remain fit for purpose?’ In his view, it had been “the best thing since sliced bread. We wanted to bring the Arbitration Law up to date in a user friendly way which would benefit international arbitration.”

Make a date with the ‘oldest city in Europe