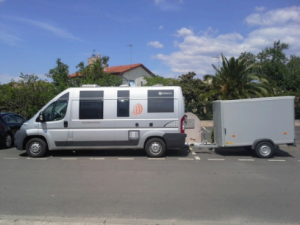 The Jifmar camper vehicle that serves as a complete Falcon base station, ready to head for the French Alps.

Working in minus ten degrees centigrade high up in the French Alps, the Jifmar team found that the most comfortable and convenient way to inspect the Tignes Dam was to load their Saab Seaeye Falcon ROV system and themselves into a recreational camper.

“The Falcon is small enough to easily mobilise and we can contain the whole system and ourselves on board the camper for working in remote locations without facilities, and at the end of the day just stow-up and head to a nearby hotel for the night.”

The mission, just completed by the Jifmar team, was to assess the integrity of the dam wall and structures such as water inlets, and measure the amount of sedimentation at the bottom of the wall.

To achieve the tasks they integrated a wide range of equipment onto the Falcon system. This included an ARIS Explorer 3000 sonar for extra fine 2D imaging and crack detection, an acoustic positioner and an ethernet HD camera with integrated lasers for scale reference.

Jean-Baptiste Loiselet says the Falcon is small but its intelligent systems architecture and five powerful thrusters can handle a wide range of large and sophisticated equipment.

“Its fibre optic capability gives us unlimited connection possibilities. We built a small interface pod with a 24V power supply and two Ethernet bulkheads, one for the ARIS or Blueview, and one for the camera and other equipment – and we still had spare power and spare RS232 bi-directional channels and ethernet connections.”

Jifmar, with support from Saab Seaeye, also designed and created added buoyancy in the shape of an enhanced faring to provide extra payload ready for fitting a skid beneath the Falcon to carry the ARIS Explorer with its tilt and roll assembly – along with any other systems needed.

Freezing temperatures could have been a problem, as every time the ROV was pulled from the water ice froze over it, but Jean-Baptiste Loiselet knew the thrusters would keep working as they have magnetic couplings rather than moving seals.

“In thousands of hours of dive time, ” he says, “Seaeye thruster technology has proved to be the most reliable in the ROV world.”

He went on to praise the versatility of the Falcon for its easy deployment, both offshore and in the dam and hydro industry for inspection and survey operations,  including long tunnel work.

“Along with all its capabilities it’s still small enough to launch from a hand operated winch, and be sent into difficult-to-access locations, down small pipes and along 1100 metres of tunnel.”

Jifmar’s extensive expertise in dam inspection comes alongside their global offshore services experience where, in addition to their fleet of vessels, they have a fleet of Saab Seaeye ROVs including three Cougars and two Falcons. 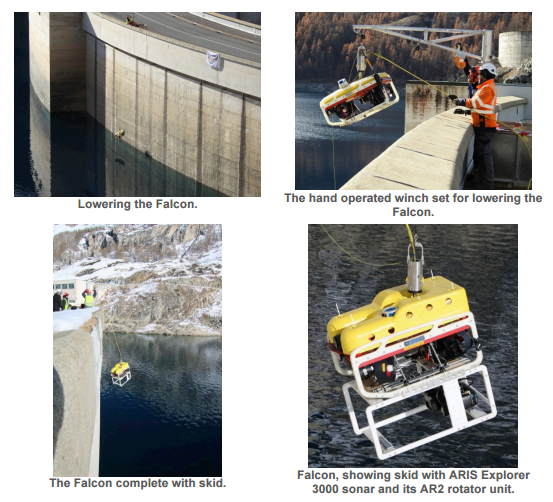 Saab Seaeye is the world’s largest electric underwater vehicle manufacturer and technology leader with the most advanced range of tethered, autonomous and hybrid vehicle systems. Vehicles, tooling and robotic solutions are engineered to address the diverse range of underwater tasks found across commercial, defence and scientific markets.

Jifmar Offshore Services offer turnkey solutions for the energy, defence and hydro industry on a worldwide basis. They have expertise in ship ownership and management,  ROV operations and marine engineering services.