All Lit Up in Bloomsbury… 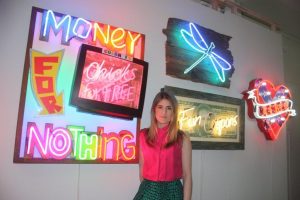 All Lit Up in Bloomsbury: April 2016 edition of The Other Art Fair celebrates neon talent

Neon is in their genes. The Bracey family has a reputation for being the beacon of the kind of artwork that makes glowing use of the inert gas-filled tubes that lure dazzled spectators to nightclub districts, and these days to art galleries.

A collection of Bracey work adorning the foyer welcomed hundreds of visitors to the April 2016 edition, the 11th,  of The Other Art Fair, at Victoria House, the imposing 1926-built edifice overlooking Bloomsbury Square.

The switched-on display was mounted by the gallery Lights of Soho, which bills itself as “the global home of creative neon and light art formats, ” and visitors were welcomed at the gallery’s stand by promoter and film producer Alexa Pearson. 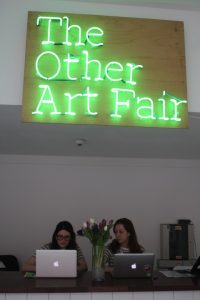 Welcome to the Fair.

Neon art was billed as one of the special features of the Fair, which presented 130 individual emerging artists from the UK and several other countries most of whom were selling their work directly to the public. Many were the artists’ mediums in play, but the Fair was an ideal forum for the ‘cool’ and often provocative neon art form.

Sadly the man whose name and whose work was effectively in lights –Chris Bracey, known as the King of Neon – died aged 59 in 2014, but his shining legacy is honoured in the practice by several members of his family and other noted admirers and followers. Even his teenage grandchildren are in on the act now.

Chris Bracey worked in this bright field of light for almost 40 years, taking his inspiration from his father Dick, who made signs and lights for fairgrounds and amusement arcades. Chris was a true son of Soho, gaining renown by using his mastery of graphic design to manufacture signage for its nightclubs and sex shops.  He powered ahead in other branches of commerce as demand grew for his artistry.

Among the fans were designers of film sets, with the result that he created and installed neon signs and props for productions including Neil Jordan’s Mona Lisa,  the Batman series, Stanley Kubrick’s Eyes Wide Shut and Tim Burton’s Charlie and the Chocolate Factory.  He illuminated fashion catwalks and department store displays.

The year before his death, Chris Bracey had his first solo exhibition in London, and his pieces continue to be in great demand in Los Angeles and many other hip centres worldwide. Jude Law, Kate Moss, Elton John and Lady Gaga have collected his work. 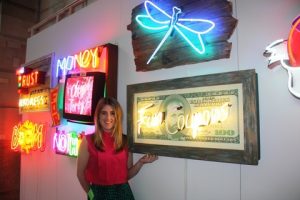 His technique was based on filling Murano glass from Venice with neon, argon and krypton. Strictly speaking, only red bulbs use the chemical element neon, while other so-called neon lights use other “noble gases, ” a category that includes helium, argon, krypton, xenon and radon.

Lights of Soho, located in Brewer Street, Soho, has some of the artefacts from the warehouse “where neon never dies” that Chris set up in Walthamstow, named God’s Own Junkyard, with new and used signs, salvaged movie and circus props and sculptures.  He was a rabid recycler, a snapper-up of discarded lighting.

Lights of Soho says that it has the support of artists including Tracey Emin – who has for a quarter of a century used pastel-coloured tubes to convey intimate messages in the style of handwriting – and that it “breaks down the boundaries of typical art galleries and offers itself as the home for all creatives and ‘Cultural Lights.’”

Chris’s widow Linda has vowed to keep aloft the “neon baton”, supported by their sons, Marcus, Matthew and Max. Looking ahead, as it always does, The Other Art Fair welcomed neon pieces by two Bracey grandchildren: Charlie aged just 18, and Amber aged 17.