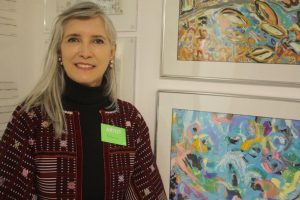 From the prehistoric to the present, from styles mannerist to modernist, from Mayan textile magic to Mexican sculpture, from formations marine to scenes  like wondrous dreams: such has been the kaleidoscope of expression in a strong Latin American showing at The Other Art Fair April 2016 in London.

All of that could be seen at stand number 101 – more a sector than a booth, as it was the size of the seating area of a London coffee shop.

Within those confines, in fact lending a surprisingly spacious ambience, Collective Latinaria, an alliance of independent artists and curators, wowed the audience at the Fair with selections from members’ prolific work in sculpture, photography, painting and drawing. Evident was the frequent emphasis of the collective on traditional and local techniques, notably the textile heritage of Guatemala.

On this salient occasion staged at Victoria House in Bloomsbury, the collective was represented by eight artists – seven of whom flew to the UK for the event – from Guatemala, Mexico and Costa Rica, supported by London-based curator Cecilia Orive. 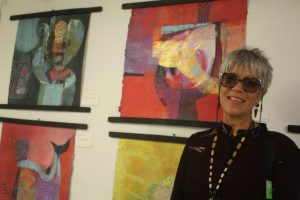 Their Central American heritage shone through their output no matter how distant it was from the contemporary nature of each piece. For example, while Rebeca Calderón Pittman who lives in the US takes full advantage of digital techniques to take her output to new levels, she was for the Fair proudly wearing an elegant jacket in traditional Guatemalan weft. In the textiles of her native land, the pattern is woven into the cloth.

Similarly, in her abstract expressionist paintings, Rebeca configures a textile and woven sensibility, emphasising surface rather than depth, achieved by acrylic and digital collage.

“I wanted to make my paintings abstract, while my drawings are very realistic, ” says Rebeca. That realism comprises much complexity of detail, executed by pen on layers of clear acetate and vellum. For all the precision, there is an air of incompleteness that challenges the viewer to rationalise the apparent disorder of objects. Rebeca’s subject matter is taken from observation of the immediate world: her inner life, her studio, buildings, and the outdoors. The poetic result is, in words coined by Byron in a different context, “a dream which was not at all a dream.”

Manhattan-based critic Dominique Nahas has written of the “apparitional quality” of her studies, and said that thereby she offers “an immersive movable feast.”

Rebeca’s giclée prints such as Nineveh do indeed with their fluid lines loosen materiality, free entities from gravity and bestow to the whole transparency. The delicate layered drawings reminded one critic of the French artist Raoul Dufy, presumably for his 1920s freedom in delineation.

Her method of working is to scan her sketches into her computer and layer and re-assemble their elements, before printing them on acetate and imposing them on sheets of vellum to achieve a multi-dimensional effect.

Another globetrotter is Irene Carlos, originally from the Guatemalan mountain town of Santo Tomás. 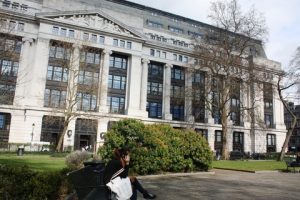 Irene explores in striking fashion forms discerned from archaeological layers going back to 7, 000 years BC. She works with bounteous colour in acrylic and silk screen upon robust paper made by a Guatemalan cooperative from corn (maize), which she appends to wooden struts in artisanal style. Some of her works – a standard 58 cm by 60 cm – incorporate gold-painted leaves, and the ocean has unashamedly inspired several of the motifs.

Silvia Herrera UNICCO, a critic, wrote of Irene in 2008 that she “transmits the sense of the vital and primordial. Her artist vocabulary put us in front of the ancestral; she presents us immediately with the fundamental and archaic.”

Elsewhere in the Latinaria exposition, the influence of traditional Guatemalan textile is seen to be at the heart of the family co-operative Xjabelle whose works chosen were huge egg shapes covered by local materials. The Xjabelle family has said: “Guatemalan history has been woven through centuries by indigenous and brave women.”

Daniela Sierra makes sculptures from resin with small floating objects, in contrast to Mexican artist María Bayard who crafts portable bronze sculptures of a geometric cast. One such from María is The British which is an umbrella-bearing figure fleeing the rain. Monterrey-born María masters a superbly mannerist style, demonstrated to perfection in her Caballo de Málaga (Malaga Horse).

For 20 years until 2012 María was a producer and manager in the entertainment industry, having been earlier a designer of hand-made tapestry and textiles. Some of her sculptures, she says, “are women who rise up from a stormy relationship, while others are an expression of the sensation of freedom.”

Paintings by Carlos Rafael Anzueto are described as dream-like, while two other artists, Valenz, and Mendel Samayoa are of a more abstract tendency.

The self-taught, mixed media artist Ana Lorena Nuñez from Guatemala is fascinated by feminism, and includes her daughter as a photographic model in brand new and touching compositions on Plexiglas. The artist has said: “I see my work as a journey through different backgrounds and experiences, conflicts and relationships that are part of every human being, especially women.”
www.theotherartfair.com