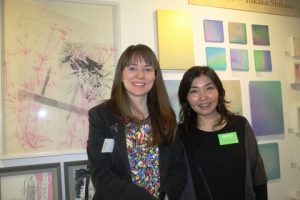 A wealth of eclectic fare at The Other Art Fair London 2016 bids for modest share of UK’s annual $13.5bn art turnover

Organisers of The Other Art Fair say that their venture, founded five years ago, is aimed at a new generation of art buyers – and it is certainly resonating with that target demography. A predominantly young crowd turned out for the latest edition of the Fair, at London’s Victoria House from April 7-10 2016. While the contents of their virtual wallets might be trendily skinny, their wealth of enthusiasm is a tremendous morale booster for the independent artists showcasing up-to-the-minute and alluring wares.

In the UK economy at large, there is plenty of money sloshing around to splash out on available artworks, but the dosh is mostly nestling in the bank accounts, onshore and offshore, of the rich. In 2015, the UK on sales of $13.5bn overtook China to recapture the number two spot behind the global art market giant, the US, according to the latest report by the European Fine Art Foundation. This was amid global sales of $63.8bn, down 7% on the year. Of this whopping amount the UK has a 21% share, pipping China’s 19%.

Encouragingly for the current artist cohort, most of the total sales value emanates from post-war and contemporary and modern art, but dismayingly for some, transactions are heavily weighted towards sales at the highest price tags.

The Other Art Fair was started to raise the profile of individual emerging artists and allow them to sell directly to the public. It has spread its wings beyond London with editions in Bristol and in Sydney, Australia. The latest London show featured 130 participants – and just as many personal styles – and catered for modest and medium budgets, with items for sale at £50 upwards.

No-one absolutely had to buy: as one exhibit had it, there were six options. These were “flirt, buy art, be a critic, Instagram, day dream, drink tea.” The exhibit was Time to Kill, a large spinnable wheel of fortune by Julia Vogl, whose social sculpture is designed to respond to its siting. On the wheel, the options were in equal segments. The Fair chose the piece as one of its publicity motifs.

Ryan Stanier, the fair director, said that the enterprise he established “was born from a realisation of the disparity between a London audience eager to discover the next big thing and talented artists struggling to gain recognition… the effects of the fair’s growing reputation are not only demonstrated through the support of leading individuals in the art world but also the frequency of success stories from past exhibitors.”

The contemporary fare is widely distinctive, and only occasionally disconcerting, so that any sceptics of the genre find their curiosity piqued by the brilliant orchestration of ideas and themes – the forms of expression are usually readily accessible.

This was reflected by any peregrination through the galleries set up at Victoria House – at the time of its completion, 90 years ago, the edifice was the second largest office block in Britain outside Whitehall. What must be one of the most people-friendly of the large art fairs brought one into contact with admirable souls eager to explain their ambitious projects and liberal visions of nature and society. 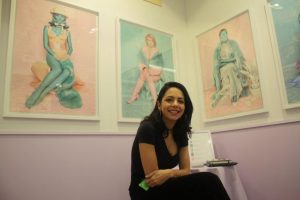 Carolina Mizrahi, who has featured in The Other Art Fair’s publicity campaigns, and has a background as an artistic director and in fashion design, showed some of the first photographic portraits she has made for a coffee-table style volume she is preparing about Diversity. The book will comprise 100 portraits of women of various ethnicities and interests, some of them in extravagant dress and cosmetics. She is collaborating with another expert on the maquillage of her models.

As with most of Carolina’s projects, this is a rose-coloured spectacle, for all of her precise photography is imbued with her trademark pink hue. The choice of pink is meant to highlight gender stereotypes and the hijacking and exaggerating of femininity and beauty rituals by commercialism.

Glorious landscapes dominated by weighty skies were on display in the canvases of Hertfordshire-based Alex McIntyre, who was exhibiting at The Other Art Fair for the second time. Her paintings are interpretations of the changing light of winter as the season softens into spring, often inspired by the scenery of her home county and Cornwall. Her work is “very much a visceral and emotional response to light and weather, ” she says. 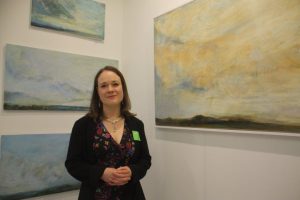 In her studio, Alex pushes and sandpapers ink and gesso into marine ply to build up layers, so the viewer, rather than sensing that the ink is just on the surface, gains the feeling that “there is a history to it.”

Hot, or rather cool, off the press was the latest work of Yukako Shibata, completed with just four days to spare before going on show.

Her statement describes her practice as “a hybrid of sculpture and painting” in which she “explores the subliminal colours of both the natural and man-made world and questions the complex interplay of light, atmosphere and the way in which we perceive these things.”

Yukako’s series Traces comprises oil-painted rectangles and squares of plywood and mdf board. Leisurely contemplation reveals the subtleties involved in the delicate paintings: “I start work with a strong colour, but it becomes softer and softer, ” although sometimes the initial strong colour is insistent. 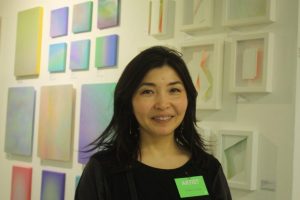 It is intense work, but “when you have ideas, you have to be able to materialise them. I enjoy the making and feel that the preparation is part of it, including cutting the board and sanding it down. I paint not just the surface; I paint the edges to extend the frame, so you feel that the light is coming through. This time I really wanted to show my painting because I am trained as a painter. You never get bored with painting.”

An earlier important series from Yukako is Colour Shade, with titles including Dancing Shadow, Shade: Triangles Green, Shade: Unveiling, Green; and Shade: Orange Scape. Just reciting the titles is soothing. The works speak to her sculptural competence: they are of paper relief inside a frame. In this Shade series, most of the coloured surface is deliberately hidden, so that what is visible is the colour reflection.
By contrast, Venetia Norris has a unique layering technique to enhance the spontaneity of drawing from life which forms the basis of her collages.

Sense of place is important to Venetia, whose current and recent work on paper in ink, paint and graphite has been inspired by residencies in Ireland, and at North London Collegiate School and its surrounding Canons Estate parkland. She combines her fascination with the world of plants with rubbings of architectural detail of historic buildings she knows well.

Of the Fair, Venetia said: “It is exciting for me to have the opportunity to see my work in a completely different context alongside wonderful contemporary artists, and it allows you to see your work with fresh eyes. It gives the work itself a second life.”

Now that the Fair is over, Venetia plans to commit to paper the compositional ideas spurred by her spell in March completing a fellowship at Ballinglen Arts Foundation, County Mayo.

Of the Victoria House event in April, “The only thing that´s left is the memory, ” as the title of one of the mixed media works shown by Ana Lorena Nuñez had it, but scores of artists are readying their submissions for the next ‘Others, ’ at the Arnolfini, Bristol, from July 22-24, and the Old Truman Brewery, London, from October 6-9 2016.