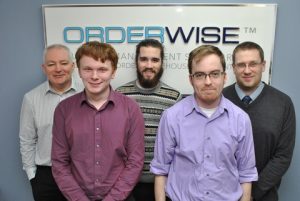 Business software leader OrderWise has added significantly to its growing team to meet the demand of several new contracts.

Having hired a host of new recruits already this year, the Saxilby-based business management software specialist is continuing its busy period of recruitment by adding five more staff, bolstering its staff base to more than 100.

The five include Kester Morley, Peter Atkinson and Samuel Dawson joining as technical support advisors, with Tom Nelson on board as a front-end developer and Mike Glew as a software tester.

Jon Roberts, Sales and Marketing Manager at Saxilby-based OrderWise, said: “These new recruits join us at a very exciting time with several new clients coming on board, including Gripit Fixings who have had national coverage and even an appearance on the BBC’s Dragon’s Den.”

Tom brings with him a wealth of knowledge and experience, having previously worked in various forms of web development and completed a degree in applied computing.

Mike has spent the past eight years running his own retail business in Somerset and has previously worked for HP, BT, Rascal, the RAF and Octel, testing systems such as The National Lottery and the Government Data Network.

Kester will be using his experience of working with Europe’s biggest online retailer of pre-owned bike parts.

Peter has more than ten years’ experience using OrderWise in a live environment, having worked for a computer component specialist that used OrderWise to sell to trade and online customers.

The recruits have spent their first three weeks learning OrderWise in a classroom environment along with regular periods in the company’s mock warehouse training facility, to ensure the real-life application of OrderWise has been understood. This was also interspersed with assessments of their knowledge and progress to ensure benchmarks were being achieved.

All five new recruits have now begun the second stage of their training in their respective departments.

•    OrderWise Business Management Software from Wise Software (UK) Ltd is a fully scalable, fully integrated and fully tailored all-in-one system, designed to suit any business, of any size and of any sector. It can bring together all strands of a business and be adapted for use across the web in order to manage stock, orders and warehousing operations, as well as sync with accounts software and other systems to provide a combined solution.
•    Based in Saxilby just outside of Lincoln, the company has been established since 1991.