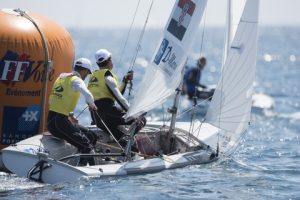 The road to the Rio 2016 Olympic Games is shortening and sailors’ opportunities to test themselves against world class opposition is narrowing with only two Sailing World Cup regattas remaining before the summer showcase.

Sailing World Cup Hyères, from 25 April to 1 May and Sailing World Cup Weymouth & Portland, from 6-12 June, are the two big remaining hit outs before the Olympic Games and sailors will be looking to lay down performance markers. 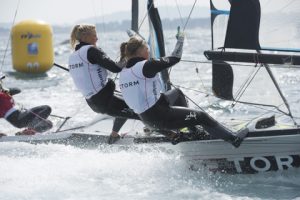 World class fleets in the ten Olympic and two Paralympic events will sail in the French Riviera and four recently crowned Open European Champions will be amongst those packs. The likes of Mat Belcher and Will Ryan (AUS) and Lara Vadlau and Jolanta Ogar (AUT) will be the leading lights in the 470 and Jena Mai Hansen and Katja Salskov-Iversen (DEN) will want to continue their winning form from the 49erFX Europeans.

Peter Burling and Blair Tuke (NZL) made it 25 consecutive 49er victories at the Europeans in Barcelona, Spain. The manner in which they took victory was compelling and no one looked close to dethroning them as they extended their spellbinding run of regatta wins.

An assured performance resulted in a 60-point margin of victory over their nearest rivals in Barcelona and the 2015 Rolex World Sailors of the Year will be in Hyères for the third consecutive year aiming to make it a hat trick.

The Kiwis look unstoppable but as with any champion, there are a number of rivals waiting in the wings to pounce at any weaknesses that arise. 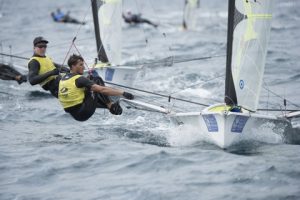 In comparison to the 49er, the 49erFX is one of the most open Olympic disciplines as of late with a wide array of regatta winners.

Denmark’s Mai Hansen and Salskov-Iversen put their name into the hat as Olympic contenders with a win at the Europeans, their first major 49erFX victory. They will be making the short trip from Barcelona to Hyères for what promises to be a highly competitive competition that features three of four 49erFX World Champions since the class was introduced into the Olympic program in 2012.

The inaugural world championship, held in Marseille, France in 2013 saw Alex Maloney and Molly Meech (NZL) walk away with the title. A year later and Brazil’s Martine Grael and Kahena Kunze took the honours and they were followed by Giulia Conti and Francesca Clapcich (ITA) in 2015. All three are Olympic podium contenders but no single partnership has been able to position themselves as favourites for Olympic glory.

Hyères will give followers a further indicator in what has so far proven to be a compelling up and down 49erFX narrative.

The 470 European Championship concluded shortly before the 49er/ 49erFX edition in Palma de Mallorca, Spain and it was business as usual as far as Australia’s Belcher and Ryan and Austria’s Vadlau and Ogar were concerned.

Both teams left Palma with gold medals around their neck and will be taking them to Hyères, where fleets of 40 in both the men’s and women’s division wait.

Sime Fantela and Igor Marenic (CRO) have been the only team to overhaul Belcher and Ryan when push comes to shove. The Croatians halted them in their tracks at World Cup Hyères in 2015, claiming gold and they ended their run of world championship victories in Buenos Aires, Argentina this year.

The Croatian, Australian rivalry will be renewed at 11:00 on 27 April when the gun goes for the first Men’s 470 race. Further contenders include Stu McNay and Dave Hughes (USA), Lucas Calabrese and Juan de la Fuente (ARG) and Luke Patience and Chris Grube (GBR).