Developments of the Panama Canal 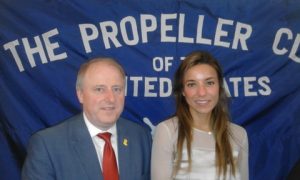 The President of the Propeller Club Cdr Ian Millen, RN, with Ana Delgado

A full house earlier on today at the Naval Club attended one of the best ever events of its kind organised by the Propeller Club of the United States, Port of London. Ana Delgado, partner at the Panamanian law firm Solis, Enara, Delgado & Guevara and former Ambassador to the United Kingdom delivered a detailed account and answered over a dozen questions on the developments of the Panama Canal which is about to open, following an expansion construction project which still keeps the world guessing and eager to see it operating in full scale, enhancing international trade and in particular that of Panamax and post-Panamax ships, which we numerous times refer to in our daily now shipping markets reports. The Canal is Panama’s trade livehood! 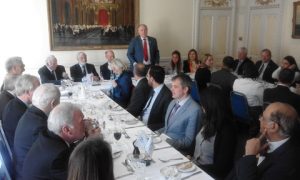 After a great lunch, Ana Delgado delivered a very detailed and up todate speech, supported with exellent photographs and slides which included projected graphics and sketches. She was in full command of the presentation, and as mentioned above, she anwered to over a dozen questions. She was warmly applauded by the 39 strong international audience!

What follows is the entire text of her presentation, point to point numerically marked,  with respectie pictures supporting same. On all counts a speech worth being re-delivered to Academias around the world; excellent!

2. Today, Panama faces the challenge of consolidating its geographical position and extending its role from a place for interoceanic transits and multimodal transportation corridor to a global logistics center.   In order to drive the growth of the logistics and transportation sector of the country, the Panama Canal conducted a series of studies to evaluate the creation of new businesses that will further consolidate our service platform.

3. In 2007, the ACP started the Third Set of Locks Project works, which consist of the building of a third traffic lane parallel to the existing ones. The project will double the Canal´s capacity and will allow for the transit of larger, wider and deeper-draft vessels.  The expansion will be a game changer for world trade as it will open new trades and will provide economies of scale and will improved transit times for vessels.

4. What is the capacity of the expanded Panama Canal?

The existing locks allow the passage of vessels that can carry up to 5, 000 TEUs. After the expansion, Post Panamax vessels will be able to transit the Canal, with up to 13, 000/14, 000 TEUs.

6.  The Panama Canal Expansion is the largest ACP project since its construction. The project creates a new traffic lane alongside the Canal with the construction of a new set of locks, doubling the waterway’s capacity.

The Program consists of several components/projects: 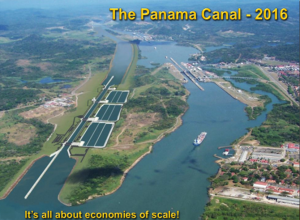 The international consortium Grupo Unidos por el Canal (GUPC) is comprised by Spain’s Sacyr , Italy’s Impregilo, Belgium’s Jan de Nul and Panama’s Constructora Urbana, S.A. and is in charge of the design and construction of the new locks.

This project involves the design and construction of new locks with neopanamax dimensions on the Atlantic and Pacific sides of the Canal.

Each locks complex will have three chambers, nine water saving basins a lateral filling and emptying system and rolling gates.

8. What are the water-saving basins?

The project also includes the excavation of new access channels, from the Culebra Cut to the new locks, and the widening of the existing navigational channels; and, the deepening of the navigation channels and the elevation of Gatun Lake’s maximum operating level.

How will it work?

The new locks will have 16 rolling gates operating from concrete recesses located perpendicular to the lock chambers. This is different from the current locks which use miter gates. Such gate configuration turns each recess into a sort of dry dock which will allow the to perform maintenance of the gate on site without the need to remove it and interrupt operations. This design increases the capacity and flexibility of locks operations, and allows for shorter maintenance time.

Located on the Atlantic side of the Canal, to the east of Gatun Locks.  For the construction, the area and alignment of the original excavations performed by the United States in 1939 was used.

This picture shows the Agua Clara Locks (from south to north), with is water saving basins on the west  (right side).  You can also see the buildings that have been finished and the visitor center at the south end of the locks.

11. In these pictures we can see work progress up to the month of April 2015, and in the next picture, taken a few days ago, specifically April 3, 2016, you can compare the progress, especially in the control tower building, access roads, as well as the gates and cameras already with operating water levels.

12. In this view April 3, 2015 of the Agua Clara Locks (from southeast to northeast), we can see the progress of the work in the middle and lower chambers.  Gates are ready for installation in addition to the construction of buildings; and, compared to the following photo dated April 3, 2016, you can see the latest optimization works of the facilities. 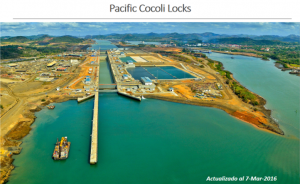 13. The following photograph of the Pacific side of the Canal shows Cocoli Locks.  In this area, during the period between 1939 and 1942, a community was built for the personnel who would be in charge of the original Third Set of Locks.

In 1952, after the project was cancelled, Cocoli was turned over to the United States Navy. According to newspaper reports of the time, by January of that year, there were only 58 families and 12 single men living in the area and they were moved to Balboa, Pedro Miguel and Gamboa.

With time, Cocolí became a ghost town with abandoned structures. This lasted until 2007, with the beginning of the Expansion Program. Cocoli became the protagonist for Canal matters as it became the central point for many of the of its most important projects.

Another view of the Cocoli Locks

The Panama Canal and the contractors’ headquarters in charge of  the second phase of the dry excavation of the Pacific Access Channel during the period between the years 2007 and 2010.

Beginning in 2009, Cocoli became the epicenter of the construction in the Pacific side of the Third Set of Locks , the most complex project of the Expansion Program.

14. In this picture of April 2015, you can see the works in the northeastern part of Cocoli Locks, such as the east side of the dam, excavation work in the access channel to the locks and the approach wall.

A recent photograph, specifically from April 3, 2016, shows the changes and progress, the finished dam, the already flooded access channel, and the majority of the structures and buildings in their final phase.

15. This photograph (April 21, 2016) shows part of the Cocoli Locks´middle and lower chambers.  Up to April  3, 2016, you can see the finished locks wall structures, functional gates in the respective lock heads, and part of the pending works such as drains and access roads.

16. In this photograph you can see the lower and middle chambers at Cocoli Locks, and on the wall are the rubber fenders that have already been installed. You can also see the control tower. 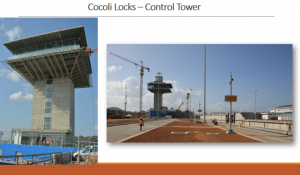 17. The locks control towers, one in Cocoli and one in Agua Clara, are stunning and striking structures. From there, all operational functions of the locks machinery, such as valves and gates, as well as monitoring of vessel traffic, will be observed.

Work to expand the Panama Canal officially began in September 2007 with dry excavation works for the creation of the Pacific Access Channel that joins the Third Set of Locks on the Pacific side with the Culebra Cut. This project consists of four phases known as PAC1, PAC2, PAC3, and PAC4. 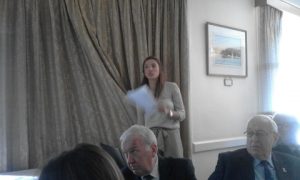 The work calls for the excavation of some 50 million cubic meters of material. The first three dry excavation phases have already been completed (PAC1 – PAC3).

To date, the required depth to enable navigation by vessels with deeper draft requirements has already been achieved and the channel has been flooded.

Who is in charge of the fourth phase of the project, known as PAC4?

Consortium ICA-FCC-MECO is in charge of the fourth phase of the new 6.1 kilometer-long channel.

A 2.3 kilometer-long dam (Borinquen Dam) needed to separate the waters of Miraflores Lake from those of the new Pacific Access channel being built under this project.

19. In these photographs we can appreciate the work of the northern part of the Pacific Access Channel and the Centennial Bridge in the background. In a more recent photo (April 2, 2016), you can see the channel already flooded, and the dredges working on the final removal of material from the bottom of the channel.

20. This photograph was taken before the beginning of the Expansion Program works (September 3, 2007). You can see Paraiso Hill, which according to the design made by Panamanian engineers, needed to be removed to make way for the access channel to the new Neopanamax  locks on the Pacific side, in Cocoli. 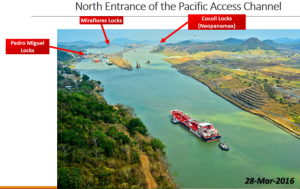 In this recent view (March 28, 2016), taken from the top of the east  pillar of the Centennial Bridge, you can see that Paraiso Hill was completely removed and the Culebra Cut is connected with the new Pacific Access Channel and the giving direct access from the Gatun lake to Cocoli. 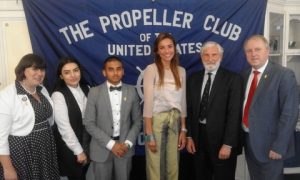