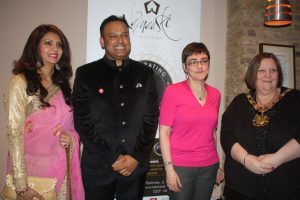 Members of Parliament, councillors, and customers from Camden Town and way beyond cheered the award-winning success of local restaurant Namaaste Kitchen at a convivial reception to mark the fifth birthday of the much-loved establishment.

The inner London venue has navigated its first half-decade with flying colours – remarkably, owner Sabbir Karim still works as a purser on long and short-haul flights for British Airways. The airline means a lot to him, for it was on one of its flights he met his wife Aneela, likewise a superb culinary talent, who partners him in his restaurant ventures.

Three MPs, a dozen Camden borough councillors, many other residents of the inner London community and customers from around the capital sang a rousing Happy Birthday as a giant celebratory cake was hauled in shoulder-high to the ceremony. 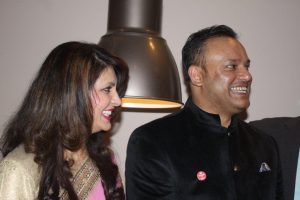 Sabbir and his hard-working team plied those present with a succession of tasty canapés on the house theme of “contemporary yet gourmet Indian and Pakistani cuisine.” Exquisite bites of chicken biryani, spiced seasonal vegetables, samosas and much more added up to a mini-feast, alongside the fine champagne, wines and juices supplied to the assemblage.

A British Bengali, Sabbir launched the restaurant, at 64 Parkway, a short walk from Northern Line junction Camden Town tube station, in 2011 as a follow-up to his first eatery, Salaam Namaste in Millman Street, Bloomsbury. Salaam Namaste – named after a 2005 Bollywood hit movie set in Melbourne – is these days entrusted to the capable hands of manager Imran.

Sabbir’s welcoming and attentive style has proven a big hit in Camden, which hardly lacks for culinary choice with scores of restaurants and cafes of all varieties close to its tourist-luring large markets of trinkets, trophy T-shirts and tat.

Few restaurants can boast the degree of loyalty achieved by Namaaste Kitchen, an accomplishment that was underlined by 20 minutes of congratulatory speeches at the packed peak of the evening.

After a formal welcome as master of ceremonies from Robert Latham, a friend of Sabbir, local personalities added their endorsement of the thriving diner. Sir Keir Starmer QC, MP for Holborn and St Pancras, enthused about his eating experiences with friends at this “fantastic curry house.” The mayor of Camden, Councillor Larraine Revah, said that the place was an asset to the area, and the leader of Camden Borough Council, Sarah Hayward, told how her hard-to-please nephew had become a big fan of Namaaste Kitchen because of its dal (lentil) dishes. 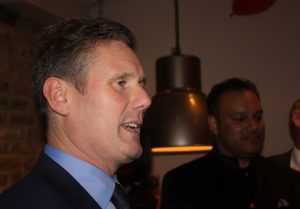 All agreed that people loved to eat in what the restaurant describes as its “relaxed yet vibrant surroundings.”

Pressed to respond, Sabbir spoke briefly of the “wonderful five years” setting up and running Namaaste Kitchen. He reflects: “We’ve created many great relationships with our local communities, customers, businesses and journalists.” 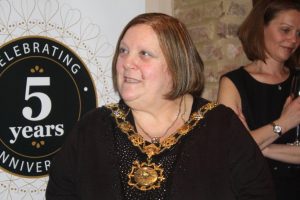 Mayor of Camden congratulates owners and staff of Namaaste Kitchen.

Almost certainly he is the only chef patron to double as a member of flight cabin crew, and he intends to continue working on British Airways flights, as he has done for 20 years. As he travels the world he takes every opportunity to sample the cuisine of distant lands, incorporating new ideas into his London restaurant menus, added to which have been the most popular dishes from a festival of regional food he ran to introduce his neighbourhood to signature dishes from around India. 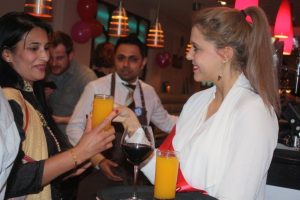 Food critics have been liberal with their star ratings, and his journey has seen him called to the rostrum at several award ceremonies. In 2011 he was a finalist in the Best Newcomer category at the British Curry Awards, going on to clinch such titles as Best Innovative Chef 2013 at the Asian and Oriental Chef of the Year Awards 2013. The following year he was honoured with further recognition in the ranks of the top chefs, and having refurbished Salam Namaaste, it was deemed at the Curry Awards to be Best Indian Restaurant of the Year. 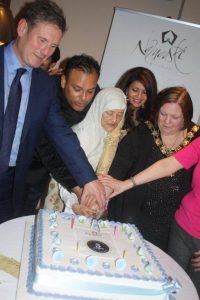 In an interview with author and journalist Rani Singh (who was among the guests at the celebration evening) for Asian Voice in 2013, the importance to the business of Sabbir’s wife Aneela was highlighted. Rani wrote: “Aneela has a Pakistani background and this adds richness to Sabbir’s culinary world. ‘I discuss a lot with Aneela, ’ he told me. ‘This opens up another dimension.’”

Conversation at the birthday bash included several political topics. Some constituents thanked Sir Keir for voting against planned legislation for the go-ahead for the HS2 high speed rail link between London and Birmingham. He was among 44 MPs who opposed the £56bn project on varying grounds of cost and environmental risk, although a big majority in the House of Commons was in favour. The rail scheme will now be examined by the Lords. 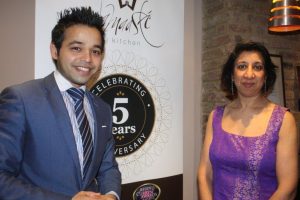 The MP, who is a former Director of Public Prosecutions and head of the Crown Prosecution Service, was among founders in 1990 of Doughty Street Chambers on the principles of “the protection of human rights, internationalism, and a commitment to represent those least able to represent themselves.” He has campaigned against mandatory capital punishment in several countries, while at the European Court of Human Rights he secured a judgment that two environmental activists who made allegations about the fast food chain McDonalds had been denied a fair trial in the UK. 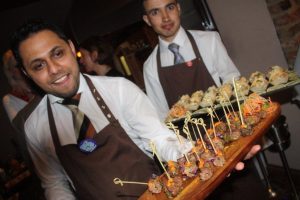 During the evening, the Mayor of Camden took the opportunity to underline her theme for the year of publicising the needs of disabled children, young people and their families.

There were good-natured attempts to persuade Sabbir and Aneela to say that they would open a third restaurant in the borough – but the couple were diplomatically non-committal about that prospect.

Developments of the Panama Canal