A farewell reception on board the “Juan Debastian de Elcano” 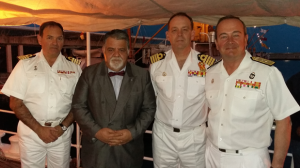 Capt. Antonio M. Padrón y Santiago, “IMO Maritime Ambassador” and Maritime Authority of Tenerife, was present during the farewell of JUAN SEBASTIAN DE ELCANO, training ship of the Spanish Navy, in her departure from Tenerife to the American continent