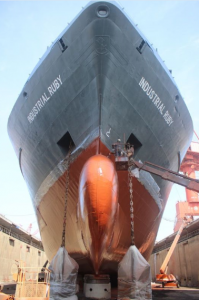 “On Earth Day, world leaders gathered to sign the Paris Climate Change Agreement and signalled a momentous step forward in the world coming together to tackle climate change. On the same day, the International Maritime Organisation’s (IMO’s) Marine Environmental Protection Committee (MEPC69) closed with a glimpse of the path the organisation will take towards a similar agreement for the maritime industry.

“During contentious discussions about when, not if, the IMO should consider firm GHG reduction targets, a familiar rift appeared. The majority of the country and industry delegations formed a clear and impassioned case for swift action while a few indicated an intent to draw out or even filibuster the process. In the context of a world newly unified under the COP21 agreement, the arguments of the minority were distinctly out of step with the stated aims of the IMO and the industry it represents.

“The IMO will renew discussions at the next MEPC meeting in October. In the meantime, leaders within the shipping industry are already innovating and making progress towards an economically and environmentally sustainable future.

“Leading charterers representing a fifth of all shipped tonnage now avoid the least efficient ships by using the GHG Emissions Rating in their chartering policies. Other charters and shipowners like Intermarine and Hammonia are teaming up to share the benefits of efficiency retrofits so that both parties can profit, making their ships more efficient and paving the way for similar projects in the future. And, through proven operational results and rigorous data analysis and verification, we are starting to see commercial traction build for cutting-edge technology solutions like Norsepower’s Flettner rotors and Silverstream’s air lubrication system.

“These are exciting developments, driven by market demand and business appetite to cut costs and emissions in tandem. So while the IMO continues to deliberate over goals for the sector, we can be emboldened by the work of industry leaders that are creating a future that balances profits and planet.

“Carbon War Room is available to offer guidance and support to any shipping industry organisation seeking solutions to reduce their emissions. Information and contact details can be found on ShippingEfficiency.org or by emailingshippingop@carbonwarroom.com”

About Carbon War Room
Carbon War Room (CWR) was founded in 2009 as a global non-profit by Sir Richard Branson and a group of like-minded entrepreneurs. It intervenes in markets to accelerate the adoption of business solutions that reduce carbon emissions at gigaton scale and advance the low-carbon economy. CWR merged with Rocky Mountain Institute (RMI) in 2014 and now operates as an RMI business unit. The combined organization engages businesses, communities, institutions, and entrepreneurs to transform global energy use to create a clean, prosperous, and secure low-carbon future. The combined organization has offices in Basalt and Boulder, Colorado; New York City; Washington, D.C.; and Beijing.

Carbon War Room launched Shipping Efficiency in 2010. Since then, it has worked with RightShip to develop the GHG Emissions Rating and make it publicly available at ShippingEfficiency.org. The Rating ranks vessels against others of a similar type and size on a simple A to G scale, from most to least efficient. It is now used by charterers to shift a fifth of the world’s shipped tonnage to more efficient ships annually and by other shipping stakeholders, including ports and banks.

Shipping’s failure to agree process for an emissions reduction framework