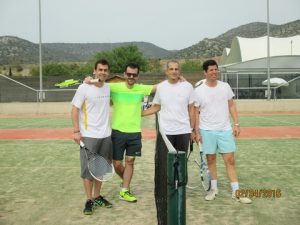 The Charles Taylor Greek Shipping Tennis Tournament is an annual tennis tournament organised by Charles Taylor (www.ctplc.com) and it is co-sponsored by The Standard Club (www.standard-club.com) and Richards Hogg Lindley (Hellas) Ltd. (www.rhlg.com).  The tournament is organised exclusively for the members of the shipping community and featured men’s singles (under 40’s and over 40’s), women’s singles, men’s doubles, mixed doubles and for the first time this year, women’s doubles.  The competition hosted 123 participants representing 60 different companies from the shipping community.  The referee, Tereza Tabossi, successfully co-ordinated 115 tennis matches over one weekend.

The Prize-Giving Ceremony was held at the Balux Prive Club on 7th April.  From Charles Taylor, Philip Stephenson, Regional Claims Director for The Standard Club and Keith Sturges, Director of the Piraeus office of Richards Hogg Lindley congratulated the winners on their achievements, thanked all the players for participating and everyone for supporting the event.  Our sponsor, Mr Antonis Theodorou of the Fais Group and all of the staff at Forty Love Tennis Club were thanked for their support. A particular thank you was made to the overall organiser of the event, Mary Miliou.

Charles Taylor people have awarded the trophies to the winners.  From The Standard Club’s  side by James Bean (Managing Director), Mark Collins (Head of Division), Philip Stephenson (Regional Claims Director) and Konstantinos Samaritis (Claims Director); from Richards Hogg Lindley’s side by Keith Sturges (Director) and Angeliki Kallini (Adjusting Manager); and from The Standard Syndicate’s side by Kate Butlin (Hull Underwriter).  Christina Soulaki (Claims Executive for The Standard Club) handed over to the raffle winners their prizes.   The Prize-Giving Ceremony was presented by Anna Doumeni, of Charles Taylor, Senior Claims Executive for The Standard Club.

The celebration continued with a cocktail party for all players and non-players.  The tournament yet again proved to be a great success with the Greek shipping community embracing the event with spirit and enthusiasm.

During the tournament, the spectators donated €562 to support the charity “The Smile of the Child”.

About Charles Taylor plc (www.ctplc.com)
Charles Taylor plc is a leading provider of professional services to clients across the global
insurance market. The Group has been providing services since 1884 and today employs
over 1, 300 staff in 69 offices spread across 28 countries in the UK, the Americas, Asia
Pacific, Europe, the Middle East and Africa.  The Group offers services, principally on a fee-based model

About Richards Hogg Lindley (www.rhlg.com)
Richards Hogg Lindley (RHL) is a member of the Charles Taylor group of companies. It is a
leading provider of independent marine claims advice on coverage and quantum issues. As
a global average adjuster, it is able to handle complex hull and machinery cases, shipyard
losses, loss of hire claims and the largest general average losses. RHL’s worldwide team
includes more Fellows of the Association of Average Adjusters than any other business.