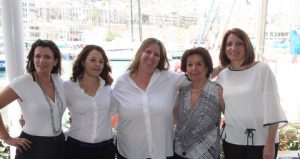 21st Annual General Assembly
The 21st Annual General Assembly of WISTA (Women’s International Shipping & Trade Association) Hellas took place on Wednesday, 6 April, 2016 at the Metropolitan Hotel, during which General Elections were held to appoint the new Board of Directors and the new Auditing Committee for the coming two-year period 2016- 2018.

It was a successful event attended by 75 members, while 34 more voted through proxies. The Association’s members were updated on WISTA Hellas’ overall activities during 2015, as well as major activities of WISTA International and in particular, were made aware of its annual financial status and the budget for 2016. A lively exchange of views, ideas and information between members present (representing all facets of the maritime industry) ensued, relating to the future conduct and activities of the Association.

WISTA Hellas is part of a greater international body of professional women actively involved in the global industry of shipping and trade spanning 34 countries. Many of its members play key roles in the companies they represent. Such diversity of professionals within a single industry has been a major factor in promoting the goals of WISTA by encouraging commercial and educational interaction on many levels.

The General Assembly of HELMEPA