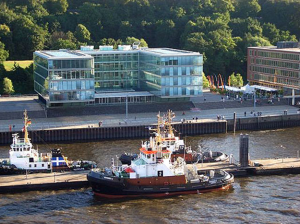 The Leonhardt & Blumberg building were the module took place

Five days spent at top maritime industry venues in Hamburg have given four dozen rising executives a near-unmatchable insight into how the industry ticks – and how it is striving to be cleaner, greener and more productive in the data- and lithium battery-driven future.

During their stay in the Hanseatic city, members of the Blue MBA (Executive MBA in Shipping & Logistics at Copenhagen Business School) Class of 2017 benefited from intensive presentations on the fundamentals of ship design – including the latest innovations – and on the legal and regulatory framework that underpins the transport business.

A vital part of this was hearing from experts at the world’s largest classification society DNV GL of the hyper-modern research, development and trialling being undertaken for ships of the future, an endeavour in which it plays an important role.

The Blue MBA candidates, who already hold senior positions in their companies and organisations, are well into the first year of a two-year part time course which is equipping them with wide-ranging shipping and strategic knowledge to enable them to “think smarter.”

They began what is known as Module Four of their graduation course with a welcome at the office of shipping enterprise Leonhardt & Blumberg, premises which have a panoramic view of the ceaseless river traffic on the Elbe, from Frank Leonhardt, one of the best known personalities in German and international shipping. Mr Leonhardt heads the family-owned shipmanagement company which was founded by his grandfather in 1903. 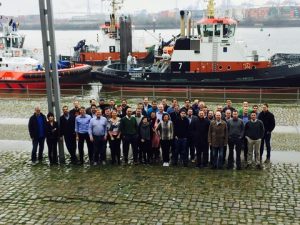 Members of the Blue MBA Class 2017 at the waterfront

Expert briefings on ship design kicked off the sessions – design as a response to perceived or estimated market needs, specific customer requirements, new technologies, changes in world politics, and how lessons are learnt from previous design experience.

The aim was to impart the key performance indicators for different ship types, and understand the main factors of regulatory, physical and economic nature that determine the capacity and performance of ships: dimensions, power, speed, stability, and so on.

This would help executives to evaluate and compare the performance of ship designs, and understand the terminology of naval architecture sufficiently to discuss design questions with specialists, and make rough estimates of shipbuilding cost and ship operating cost.

The second part of the module was an introduction to maritime law, with emphasis on what is relevant for a shipping manager such as charterparties, liabilities, tax issues and joint ventures. It aimed to give students sufficient insight to understand the basic legal implications of operating vessels; assess the legal risks involved in trading goods by sea; and communicate with lawyers on technical aspects of maritime liabilities and casualty scenarios. The module also considered the regulatory regime, international political lobbying mechanisms, and EU competition law.

The legal lectures were led by Filippo Lorenzon, a professor of maritime and commercial law at Southampton Law School and former director of its research centre, the Institute of Maritime Law; and (in regard to collisions, salvage and ship arrest) by Dr Volker Lücke, a partner at law firm Ince & Co in Hamburg.

A further highlight was the group’s visit to the offices of DNV GL, where they were welcomed by the society’s director for business development, Jörg Janßen.

Mr Janßen outlined the global reach of his organisation, detailing that it had 12, 800 ships and mobile offshore units in class, totalling 265m gt. In terms of gross tonnage, this was a 21% market share.

Rasmus Stute, DNV GL approval director, referred to the new DNV GL rules which entered into force in January 2016. They were formulated after consulting more than 800 stakeholders, “setting a new maritime benchmark.”  Its involved reviewing 7, 000 pages and more than 2, 000 detailed comments from shipyards, manufacturers, owners, and flag states. The result was more than 700 rule modifications.

Mr Stute said that with big data becoming available, “we expect easier access to data, real-time availability, advanced analytics and additional advice, and more transparency.” Core class services would not change in essence, but they would be enriched, and additional advisory services and software products would become available

DNV GL’s role in ship design and optimisation was outlined by Volker Bertram, project manager engineering services and newbuilding professor at the World Maritime University. He referred to increasingly sophisticated simulations such as fire and evacuation – “we save lives.” Energy flow simulation could minimise a ship’s annual fuel bill, he said, citing an example of a 5.5% saving, equivalent to $12m. Zero-emission technology was feasible for 2018, said Mr Bertram.

An overview of one of the most exciting prospects for the maritime world – electric and hybrid propulsion – was given by Narve Mjøs, DNV director for battery services and projects. He began by saying that CO2 emission from just one big containership was equivalent to emissions from 75, 000 cars. Batteries could eliminate or significantly reduce emissions in emission sensitive areas.

He gave 23 examples of ships with battery systems and forecast: “In the future, most ships and vessels will be hybrid or plug-in hybrid.” Savings in fuel costs would be in the range of 30% to 85% in Norway.

Ships suitable for battery hybrid operation were those with periods of low engine utilisation, and those with large power variations. Possibilities in applying the advance to the deep sea sector included green sailing in harbour areas, green port operations, hybridisation of auxiliary machinery and ship power plants, and energy recovery from cranes and lifting operations.

He emphasised that the last few years had seen Li-ion batteries dominating the markets, reduced battery prices, increased energy density and improved safety, quality and reliability. In the next five years, variants of Li-ion batteries would be to the fore.

Mr Mjøs gave an update on the Green Coastal Shipping Programme, a public-private partnership aimed at establishing “the world’s most efficient and environmentally friendly coastal shipping, powered wholly or partly by batteries, LNG or other eco-friendly fuels.”

He said that there were more than 50 commercial participants in phase one, where pilot projects were evaluating the potential for battery and LNG-based transport in Norway.

Phase two would be to evaluate business cases, phase three to develop an implementation plan, and phase four implementation. The programme is at the end of phase one with a growing number of participants; phase two will start on June 24 2016.

Olaf Drews, DNV head of machinery systems and marine products declared: “LNG as a ship fuel has the potential to improve the environmental footprint of ships significantly.”

He said that as of mid-March 2016, there were 76 LNG-fuelled ships in operation worldwide, excluding LNG carriers and inland waterway vessels; and 86 confirmed LNG-fuelled newbuildings. The infrastructure for supply was taking shape, as various LNG bunker vessels were on order. “The technology for propulsion, storage and bunkering of LNG as fuel is available on the market now.”

Mr Drews insisted: “LNG is the only alternative fuel which is available worldwide within the next decades and which can compete in fuel price with oil-based fuels.”

Irene Rosberg, Blue MBA programme director, who co-ordinated the Hamburg-based module, said later: “Thanks to the wonderful co-operation of Mr Leonhardt and his colleagues at Leonhardt & Blumberg, the team at DNV GL, and our first-class tutors, this was a fascinating and instructive week for our students.

“We have received magnificent support for the objective of the Blue MBA which is to offer the rising generation of industry leaders a thorough grounding in maritime business strategy, finance and practical application of knowledge.”