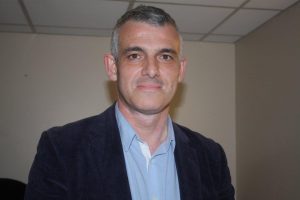 After hitting a cyclical low, the resource sector is seeing some optimism.  “This looks like we are recovering now, ” says Paul Johnson, chief executive of exploration and asset trading company Metal Tiger plc. “I concur with the view that the metals sector is turning round, ” adds Julian Hanna, managing director of MOD Resources, in front of a large audience of City investors.

Metal Tiger and MOD Resources are delighted with the progress of their joint venture, 8, 500 km distant from the UK, in the Kalahari Copper Belt of Botswana. The partners are said to have made a spectacular start in their first drilling campaign, and their share prices have appreciated on their respective markets. AIM-listed Metal Tiger was at one stage in April 2016 up more than 800% and Australian Stock Exchange-quoted MOD jumped 350% from its early March price. 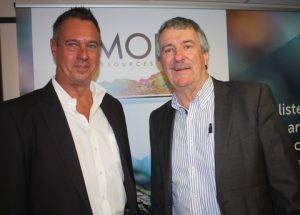 Mr Johnson told investors: “You will find all the boats rise when the tide comes in, but you want the speedboats!”

In mid-March, MOD asked the Australian exchange for a temporary halt to trading to allow time to evaluate new drilling data from its T3 copper and silver discovery. After two days MOD released what Mr Hanna termed “extraordinary” results. Mr Johnson called the data “exceptional, ” adding: “You do not find opportunities very often like this in the world.”

Metal Tiger was given what seems to have been an auspicious name when it was founded in mid-2014 during the Year of the Tiger. “Our desire from the off was to find big projects, ” said Mr Johnson. He said that Metal Tiger was well capitalised and “ready to take advantage of opportunities that exist in the current buyers’ market.” The company has a market capitalisation of £23m.

Exploration is under way at four licences in highly prospective areas of the Kalahari Copper Belt.  The partners were offered the opportunity in 2015 to participate in the project, and within a week of final ministerial approval began drilling. The financial formula is that Metal Tiger has 30% and MOD Resources 70% of a UK joint venture named Metal Capital, which has a total of 14 Kalahari licences. 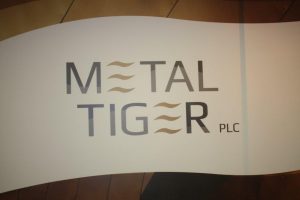 The companies’ combined copper holding is the largest in the Kalahari, with the licences covering a 6, 300 sq km of flat, sand-covered terrain. At one end is Ghanzi, a town of about 13, 000 people that relies heavily on farming. MOD and Metal Tiger have an agreement with the Botswana government to support the local community through employment and training. Nearby, a competitor company, Cupric Canyon Capital, is developing the largest underground deposit in the Kalahari.

MOD Resources general manager for exploration in Botswana, Jacques Janse van Rensburg, spoke of grades comparable to the Zambian copper belt. MOD Resources has its own advanced project nearby at Mahumo, with a 2.4 km long stage one resource (measured, indicated and inferred together) put at nearly 2.7m tonnes.

As it reported the copper sulphide mineralisation, MOD Resources saw its shares rise to the year’s best of A$0.04.Metal Tiger shares, which had been lacklustre for much of the previous 12 months, strengthened for the same reason, jumping from 0.8p in March to a high of 6.4p, and have since hovered around 4.5p.

On April 19 2016 Dowgate Capital Stockbrokers issued a revised research note and valuation on Metal Tiger with a price target of 6.25p per share (up from the previous target of 2.42p in its February 23analysis),  in response to the drilling results in Botswana and developments in other Metal Tiger ventures. Dowgate Capital additionally cited “improved commodity prices and project de-risking.” The note said: “We continue to recommend Metal Tiger plc as a Buy.” 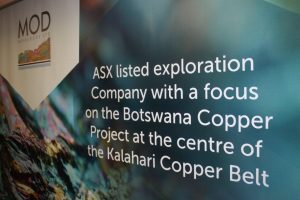 MOD Resources spells out its quest.

The broker said that the drilling results from MOD “have been very encouraging and suggest the chance of making an economic discovery on the Kalahari Copper Belt project is much greater than [we and] investors anticipated at the start of this year.”

It commented: “Given the recent drilling exploration results, we now believe there is a very strong likelihood of this project becoming a company maker for Metal Tiger plc. Operating in Botswana, which is considered to be the Switzerland of Africa, given its stable democracy and relatively high GDP per head, coupled with projects holding potential to be low cost, high grade, long life operations, makes [Metal Tiger’s] interests here immensely attractive.”

Metal Tiger has a varied direct project portfolio. It is seeking to diversify its interests in Thailand, through potential output of silver, lead and zinc. Representatives are talking with the Thai family that owns a mine at Kanchanaburi that was operated for decades, with underground tunnelling hewn out of rock, to reach agreement to resume production. “It will throw off free cashflow, ” said Mr Johnson.  “It is a huge positive for the local community: this will employ 400 people if it comes back into production.”

Then there are two exploration licences and one pending licence in west-central Spain. This involves a joint venture with a private UK company named Mineral Exploration Networks (Finland) Ltd. Mr Johnson described this as a key project involving two potentially substantial tungsten deposits, and  a gold prospective licence.

Mr Johnson said that Metal Tiger is partnering with London-listed Eurasia Mining to participate on equal terms in what is known as the Semenovsky Tailings Project, “a near term gold production opportunity in Russia.” (Mr Johnson confided with his City audience that he had just had an informal conversation with a fund manager who “thinks Russia is about to experience a contrarian turnaround in terms of investment.”)

Tanzania is another area of potential activity. A “significant gold-bearing structure” has been identified with Kibo Mining, a company which operates from Dar es Salaam and has assets in coal, gold, uranium and nickel-platinum group metals.

Metal Tiger has invested £1.4m since listing on AIM in asset trading in resources projects and operations. The company says it is building a strategic natural resource warrant portfolio ready for a recovery in the sector. “We think this is a wonderful time in [undervalued] equities to trade shares, ” said the chief executive.

Dowgate Capital said it was encouraged by widespread buying in Metal Tiger in 2016 by its board members including non-executive chairman and chief geologist Terry Grammer, who had invested £422, 000 in cash over the last few months. Mr Grammer had an “outstanding track record of assisting companies in finding major discoveries.”

For MOD Resources, Mr Hanna said of commodity prices generally, “nickel is always the first mover, and copper is ‘starting to show a little sign of life.’” He said that Botswana, the world’s largest diamond producer, was looking to diversify the economy “and copper is high on the list.” MOD Resources has a market capitalisation of around A$39m and has just raised A$2m.

Mr Johnson said: “We want to build into a much bigger company.” He said that the company was “seeking high growth rate to become a strong diversified resource business in precious and strategic metals, ” and there was “an exit strategy to deliver financial returns to shareholders by distributions of material gains towards the peak of cycle.”

The City presentation was organised by UK Investor Forums and Mining Maven.