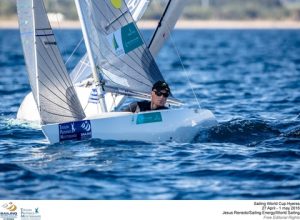 At the Sailing World Cup Hyères a duck was broken as Australia’s Matthew Bugg got his maiden international event win in the 2.4 Norlin OD. In the Sonar class, Norway took the gold away from an up and down regatta for the team on the French Riviera.

In the first race of the Sailing World Cup Hyères, Australia’s Matthew Bugg took a bullet in the 2.4 Norlin OD and that set the tone for the whole regatta as he finished with a gold medal for his efforts.

Consistent throughout, the Australian put the gloss on his week with another bullet and a second place on the final day of racing to finish on 17 points to take his first international event win.

Talking us through his regatta, Bugg said, “It was a really good week for me, it is the first international event I have won. I won quite convincingly as well so I am definitely happy about that. We had a good mixture of weather from very windy to quite light and we managed to get all our races in. I loved it.”

You could tell from the smile on his face he loved it and he found an extra gear to thrive in a very mixed bag of conditions. Like all sailors competing, you learn to love whatever is thrown at you, Bugg is no different, and it was a good thing because that’s what Hyères offered, “I like everything. It’s really fun when you get in at the end of the day after a real blow, but, it’s not always so fun sailing out there at the beginning of the day knowing you have two or three races in very strong winds to come.”

With his first win under his belt, Bugg now moves on for a relaxing sail before the competition picks back up at the Para World Sailing Championships in Medemblik, Netherlands at the end of May, “I’m going to Garda [Italy] now to do a bit of a fun regatta and then to Medemblik which is a regatta I’m going to win.” With a look of realization on his face he corrected, “I mean I’m not going to win, I am going there to win it.”

If Bugg is going to win he has to get past current World Champion and France’s own Damien Seguin who took the bronze medal with 31 points after a less than perfect start, “With my bad few first races it wasn’t the best start from me, but I keep on improving and I think I am in good shape.”

“It was a special week, it was like my twelfth time in Hyères but the first week like this with very light and very strong winds. It was difficult, but I’m happy with my third place.”

Sandwiched between Bugg in gold and Seguin in bronze was Norway’s Bjonar Erikstad. The Norwegian sailor took bronze with 25 points. His 25 points was built from two race wins and finishing around the top of the fleet in all the races.

The Sonar gold was won by Norway’s Aleksander Wang-Hansen, Marie Solberg and Per Eugen Kristiansen who finished their regatta with a bullet in the final race.

The week didn’t start as planned for the Norwegian team and the first two race days were a struggle, as Wang-Hansen points out, “It started out rough with heavy weather but we managed to scramble to a fairly good result in the first race. We had a tough second day also, but the last two days have been brilliant for us.”

The last two ‘brilliant’ day’s included two bullets and two second places which moved them in the right direction up the leader board while everyone else was seemingly heading the other way.

The reason for the upturn in fortune was the change in the Hyères winds as Wang-Hansen explains, “We like it when it is a bit more shifty and there is more opportunities for gains and we showed that again today in our racing.”

With 18 points and a Sailing World Cup Hyères gold medal, Wang-Hansen was very matter of fact about the win, “What does anyone feel about winning? It’s what we are here for.”

Out of all the other sailors that were also here for the win, it was Great Britain’s Hannah Stodel, John Robertson and Steve Thomas who took silver and USA’s Alphonsus Doerr, Bradley Kendell and Hugh Freund who have bronze.

Finishing nine points behind the winning team, Great Britain held on to silver with 27 points despite a retirement in the final race. Closely following but unable to pip them at the post, team USA finished just one point back on 28.

Next up for the Paralympic classes is the Para World Sailing Championships in Medemblik, Netherlands from 24 – 28 May.